Previously on SBPDL: The Most Enduring Symbol of the Civil Rights Movement — Plexiglas

Plexiglass is the greatest indicator the civil rights movement ushered in a great lie, replacing common sense measures to protect both private business and those employed by the business (cough... cough... Jim Crow).

In Philadelphia, where the new District Attorney is openly anti-police and pro-Black Lives Matter, a grotesque wave of egalitarianism threatens to overwhelm the city in an anti-civilization deluge. 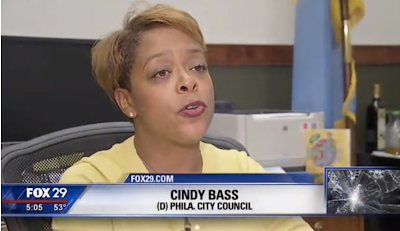 At the end of the day, elected black officials exist to protect black criminals from the consequences of their actions

For Jeff Liu, the thick plexiglass window that separates him from patrons at his Germantown beer deli, Kenny’s Seafood & Steak, is a matter of safety. For City Councilwoman Cindy Bass, the barrier window is an insult.

The plexiglass partition serves to protect workers from crime, but it also cuts them off from customers — a literal and metaphorical divider between their worlds.

Several years ago, after Liu argued with a man selling drugs in the Wayne Avenue deli’s lobby, the man returned with a rifle and shot Liu’s car, shattering its windows, Liu said.

Bass says the windows only foster a sense that the establishment – more specifically, its clientele – is dangerous. And that too many of those stores masquerade as eateries when their biggest sales draw is alcohol, feeding vices in the city’s struggling neighborhoods.

“It’s an indignity” to buy a meal through such a window, she said.

The debate is likely to gain steam Monday, when hundreds of merchants and advocates are expected to protest before a Council committee hearing on the matter. Bubbling beneath are undercurrents about class, race, and how far the city can go in telling business owners how to operate.

It needs a majority, or four, votes in the seven-member public-health committee to head to a full Council vote Dec. 14. Mayor Kenney, through his spokeswoman, said Thursday that he doesn’t yet have a position on the bill.

Yale sociology professor Elijah Anderson, who has written extensively on Philadelphia’s urban environment said the plexiglass window sets up “a symbol of distrust” in neighborhoods where many African Americans live.

“Of course some people are bad, but most people who come to that window are good, and they’re not trusted either. That angers, alienates them,” said Anderson, who previously taught at the University of Pennsylvania. “They know they’re civil, honest people. They’re hit with this symbol of distrust and it works on your psyche in subtle ways. You know that you’re devalued as a customer.”

Plexiglass is a representation of racism to Councilman Bass, with no defense allowed by those business owners who rely on this defensive mechanism to protect their employees because it would only justify the racial impediment.

But here's the kicker from the Philadelphia Inquirer article:

But Adam Xu, 54, chairman of the Asian American Licensed Beverage Association of Philadelphia, said the protective window should be a business owner’s choice. His association represents 217 beer delis in the city, about 70 percent of which are owned by people who are ethnic Chinese and another 20 percent of Korean descent.

“Most of our businesses,” he said, “are in not-as-safe neighborhoods.”

Sae Kim, who owns Broad Deli on Broad Street near Susquehanna Avenue in North Philadelphia, said his business has been threatened numerous times but never robbed at gunpoint, crediting the plexiglass as a deterrence.

Before his family took over the business 20 years ago, the prior owner’s son was fatally shot when there was no partition, Kim said.

About 15 years ago, Kim said, a man with a knife tried to rape his mother-in-law but she was able to escape to safety behind the partition and lock the door.

“Basically, they’re telling us either to do away with the glass, knowing you could be endangering your life and employees, or shut down the store,” said Kim, 46, who was born in South Korea and came to Philadelphia when he was 10. “Who’s going to be responsible when we see body bags going out of these establishments?”

“I would never want to be part of a bill that would put somebody in jeopardy,” said Bass, whose district includes Germantown, Nicetown, Tioga, Logan, and parts of North Philly. She said the proprietors could hire security guards and install surveillance cameras.

“These businesses in particular have skirted and flouted the law for years,” said Bass.

She said the bill stemmed from constituents’ complaints about stop-and-go stores being nuisances that sell alcohol nearly round the clock.

“My interest is to see restaurants where a family can go down and have a meal,” she said, adding that she has been “flabbergasted” by the image of workers serving food through a window as if customers were “in prison.”

The cost of doing business in an overwhelming black area is represented entirely by the requirement to enclose employees behind bullet-proof plexiglass, granting them some semblance of safety.

It's those trying to do business in an entirely black-area of Philadelphia who must protect themselves by such desperate measures as placing the entire contents of their store behind plexiglass who are truly imprisoned.

Again, the most enduring symbol of the civil rights movement is obviously plexiglass.

In Black-Run America (BRA), anything designed to protect non-blacks from the consequences of black people is automatically racist, which is why plexiglass must come down. Lives hardly matter when the dignity of black criminals is in question.

Plexiglass is, of course, the ultimate reminder pattern recognition save lives.