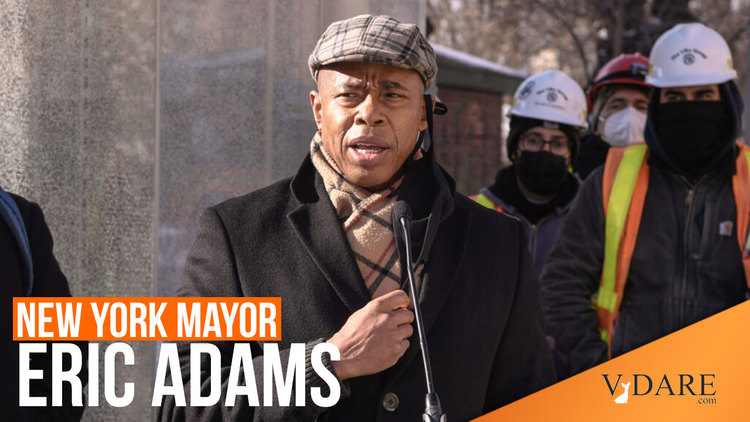 The momentum for The Great Separation is too great. It’s coming.

First the racial chauvinism started with the diminutive mayor of Chicago, who demanded only interviews from non-white journalists. Now this racial litmus test has migrated to New York City.

New York City Mayor Eric Adams blasted the media by claiming his press coverage is skewed because of a lack of racial diversity.

Adams held a press conference in Albany on Tuesday, a day after meeting with New York state officials to discuss several issues he wants to prioritize for his leadership agenda. Multiple reports stated Adams didn’t make much headway in the meeting — an assessment which he seemed to partially confirm as he voiced his frustration with the resistance he has encountered for his criminal justice ideas.

At one point in the presser, Adams seemed to get angry over New York Daily News’ framing on how the meeting went.

“There was no arguing, no yelling, no screaming,” said Adams. “Areas we disagreed on we talked about it and we walked through them. We talked about all of these issues in a civil way.”

Adams went on to tell reporters he might stop taking “off-topic” questions in future press engagements. He also claimed he gets unfairly negative coverage because he’s Black.

I’m a Black man that’s the mayor but my story is being interpreted by people who don’t look like me. We got to be honest about that. How many Blacks are in the editorial boards? How many Blacks determine how these stories are being written? How many Asians? How many east Indians? How many south Asians? Everyone talks about my government being diversified. What’s the diversification in the newsrooms?

Adams continued to accuse the press of covering him “through the prisms of your realities and not mine” since most of the reporters following him are White.

“Diversify your newsrooms so I can look out and see people who look like me,” Adams said. He continued to address the press by saying “if this is how this is going to be, I’m just going to come in and do my announcements and bounce. Why am I even answering these questions? And it happens over and over and over again.”

Any unfair coverage/criticism of a black person is automatically white supremacy, negated with fawning coverage from a non-white entity.

We call this black privilege.

Black elected officials criticized by white people is axiomatically a form of systemic inequality/implicit bias/white privilege and must be immediately and instantly denounced.

Folks, we come to the end of the delusional quest to fulfill Martin Luther King Jr.’s dream.

The Great Separation is upon us.

White people can pretend to be color-blind and that race doesn’t matter, but every day we are reminded that isn’t the case by non-whites.