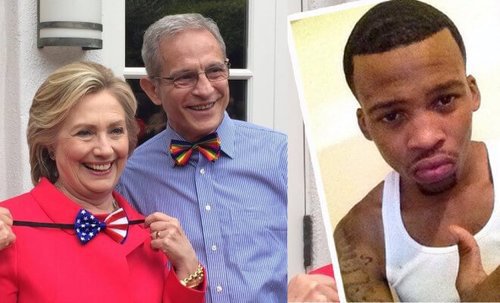 I’m guessing you won’t hear much on this story from the New York Times or the Washington Post, but the L.A. Times, to its credit, is on it.

A big-time Democrat donor and homosexual pervert is in trouble for the death of a black male prostitute at his home. (Pictured right, Ed Buck with a failed Democratic candidate, and the deceased.)According to the Left Coast Times, Ed Buck’s place was littered with drug paraphernalia.

The coroner's report says that, about 6:45 p.m., Moore was visiting "his friend's residence" and “was witnessed by his friend” becoming warm and unresponsive after using methamphetamine injected about 5 p.m. The male friend’s name is redacted.

The friend alerted a neighbor who “has medical knowledge” and attempted CPR until a paramedic arrived. The report says Buck called 911.

Police indicated that someone at the scene “is suspected to be known to exchange drugs for sex,” the report states. The name is redacted.

According to Fox, “Buck is a well-known Democratic contributor, and has given more than $500,000 to an array of Democrats including Hillary Clinton, Barack Obama, Los Angeles Mayor Eric Garcetti, Los Angeles County District Attorney Jackie Lacey and a variety of state and local organizations in California.”

According to Jasmyne Cannick, an advocate for Moore’s family, a number of other gay black men have claimed Buck would invite them to his house, then pay them several hundred dollars to take drugs.

This story invites questions; What else was Buck paying them for? And in this conflict within the coalition of the fringes, where will the media’s sympathies fall?

With a black male “escort,” or an old white fairy who cavorts with the Obamas and Clintons?