Black ESPN Writer Howard Bryant was `Racially Profiled` for Publicly Smacking Around His White Estranged Wife; Wife Veronique is Standing by Her Man 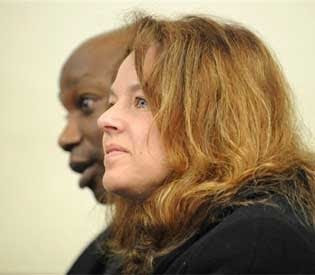 The happy couple in court.

Well, it was Bryant’s attorney, Buz Eisenberg, not me, who made the whole thing racial. So, let’s grant him his wish.

Bryant’s attorney, Buz Eisenberg, blamed the arrest on race. Bryant is black and his wife is Caucasian. “If Howard Bryant was Caucasian and was on the streets having exactly the same conversation with his wife — nobody would have even noticed,” he said.

Stupid is as stupid does, Buz. I’m referring to both you and your client. According to the witnesses, Howard and Veronique Bryant weren’t having “a conversation”; he had grabbed her by the throat, and shoved her up against their SUV, in which their six-year-old son was sitting in the back.

And, forgive me for asking, Buz, but what were two devoted parents doing walking around on the street, while leaving their kid in a vehicle? And outside a pizzeria, the holy of holies, for crying out loud!

So, racial demagogue Buz Eisenberg is trying to turn his alleged wife-beater client into a victim of racism? Maybe you can get over with that sort of thing at cocktail parties with rich swells, or among black racists, Buz, but the general white public isn’t stupid enough to buy that particular bill of goods. In case you haven’t already, you need to tell your client that the next time he feels the need to smack around his wife, he should wait until they’re behind closed doors.

In all of our years of wedded bliss, I can’t recall The Boss ever taking a swing at me, trying to run me through with a carving knife, or seeking to bend my brain with a tire iron … in public. That’s what family time is for.

The wife of ESPN sports scribe Howard Bryant is standing by her man, saying she’s “never been a victim of abuse” — even after state police busted him for what witnesses described as a violent attack on her outside a small town pizza shop.

“I’m not a victim of abuse — never been. Not now. Not ever,” Veronique Bryant told the Herald during a phone interview yesterday — her husband of nine years at her side.

Bryant, 42, a former Herald sports columnist living in Ashfield, pleaded not guilty to domestic assault and battery, assault and battery on a police officer and resisting arrest in Greenfield District Court. He was released on personal recognizance.

Bryant told the Herald he didn’t harm his wife. “I did put my hands on her. I did not physically assault her,” Bryant said. “We had a spat like married couples do.”

They told police a man — later identified as Bryant — grabbed his wife’s neck, pushed her into a parked vehicle and pinned her against it around noon Saturday outside a pizza shop in the western Massachusetts town of Buckland.

The couple then retreated to their sport-utility vehicle — where their 6-year-old son sat in the backseat. State police said Bryant resisted arrest, elbowing and struggling with a trooper who was trying to cuff him, according to Procopio. Three other officers were forced to intervene and slammed Bryant chest-first onto a vehicle hood, state police said.

Veronique Bryant, also 42, said the cops overreacted. “They immediately started to use force on Howard,” she told the Herald. “They didn’t even ask what was going on. We were sitting in the car together and there was not a fight going on at that moment.”

“The witnesses overreacted,” she added.

Nice try, Mrs. Bryant. The witnesses didn’t overreact, they reacted. I guess some of them didn’t want to live with what might happen down the road, had they not “overreacted.”

This is the second time in the past year-and-a-half, in which police in the Boston-area made a lawful, proper arrest of a black man, and the black man went out of control, and tried to make himself out to be a victim of racism. The other case, of course, was that of race-hoaxer Henry Louis “Skip” Gates Jr. And in both cases, the arrestee tried to intimidate whites out of calling the police on blacks engaged in criminal or apparently criminal behavior, in the future.

To out-of-control black men and your lawyers: I know I’m talking to a wall, but I’m going to say it, anyway. Every time you mooks scream “racial profiling!” at the top of your lungs, honest people hear: “Guilty!”

(Thanks to the reader who sent me this story.)