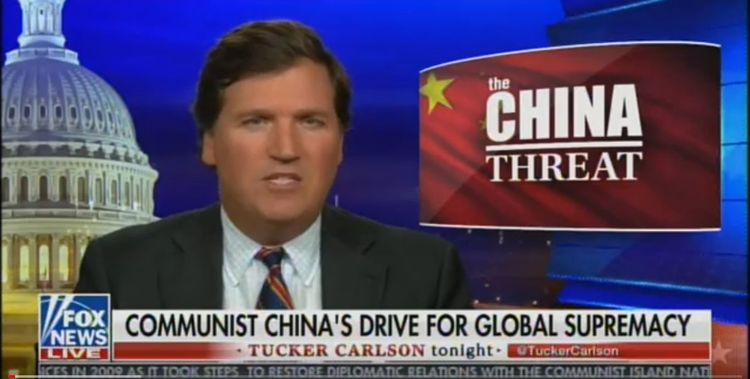 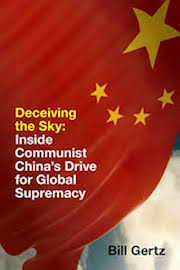 National security reporter Bill Gertz has been investigating the threat posed by Red China for years. In 2000 he wrote the book “The China Threat: How the People’s Republic Targets America.”

He was also involved in the Chi Mak espionage case (covered here starting in 2007) where Gertz went to court to protect his government source who leaked information to him about the Chinese spy who stole US defense technology.

On Friday, Gertz appeared on the Tucker Carlson show to discuss his new book, Deceiving the Sky: Inside Communist China’s Drive for Global Supremacy.

It was a short interview for such an important topic. If it had been longer, the two might have discussed how foolish it is for America to continue welcoming Chinese college students to study technology at our top institutions which are dangerously naive toward unfriendly foreigners.

TUCKER CARLSON: China is a rising superpower; it plans to displace the United States as the world’s strongest country.

Bill Gertz is a senior editor at the Washington Free Beacon who’s author of the new book Deceiving the Sky: Inside Communist China’s Drive for Global Supremacy.

He joins us now for his first TV interview about that book. Bill, great to see you tonight. We’ve done a bunch of segments on China but you’ve dived so deeply into this, give us the overview: where would you say China is right now in its effort to overtake the United States?

BILL GERTZ: Just the other night you had a segment quoting the Democratic presidential candidates as saying climate change is an existential threat — that’s not true. The real existential threat is Communist China, and it’s going to take all of America’s will, policy, focus and effort to mitigate that threat. We are in real trouble. China is on the march.

Xi Jinping has shifted the old policy of Deng Xiaoping, which was “bide our time, build our capabilities.” They are now out front. He has something called the China Dream, which is really a Chinese communist nightmare, and they are on the move. They are doing this Belt and Road Initiative, which is a cover for military and economic expansionism around the world.

CARLSON: The assumption has been I think among American politicians and business leaders that we can just co-exist, and sure they’re getting more powerful, but we’re fine and we can both kind of run the world together. You think that’s true?

GERTZ: Absolutely false. Yeah, you know the whole policy of engagement has been basically a 40-year gamble that if we just trade and engage China that this will turn it into a benign free-market open system. Well, it’s utterly failed, going back to the Clinton administration, for example, they had this idea that we should engage on nuclear cooperation, on space cooperation. What happened?

They ended up stealing nuclear secrets on every deployed US warhead. That technology was then spread to Pakistan, North Korea and other places. We helped their missiles, and now their missiles are aimed at our cities. They have an array of long-range and short-range and intermediate-range missiles. This is a real problem.

CARLSON: So, Bill, I wish we had more time for this, and I hope you will come back. Quickly, if you’re China, you look at Trump—he’s the first American president ever really to call your bluff and challenge you—aren’t you gonna do everything you can to tank the US economy before the election so that he won’t be reelected?

GERTZ: Absolutely, they’re definitely going to try that. They’re already working in the farm states, they’re working against the whiskey industry in the United States to undermine Trump. They want a different president—that’s what Vice President Pence said last fall.

CARLSON: Yeah, you just know that that’s true. Bill Gertz, congratulations on the book. I hope it’s read by millions.