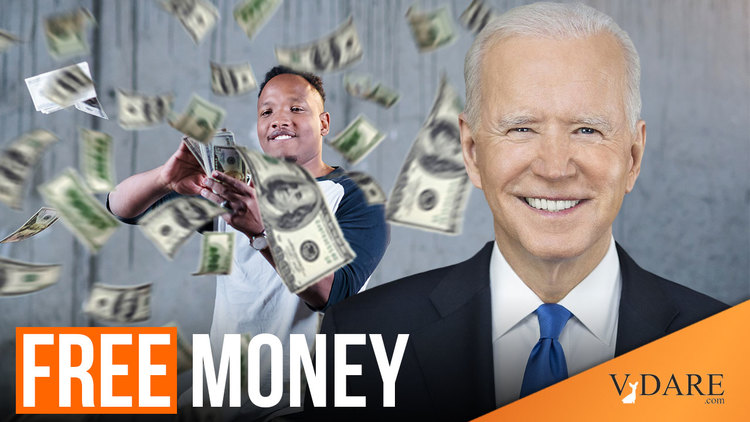 Earlier: A Glimpse Of Biden's America—Massive Redistribution Of White Taxpayer Wealth Proposed As Part Of "Justice For Black Farmers Act"

So now Biden’s Treasury Department decides to release $8.7 billion—white taxpayer money—to help increase lending to exclusively minority-owned businesses across America. How is this constitutional, you might ask? Whatever benefits BIPOCS, at the expense, is obviously constitutional in Black-Run America (BRA).

The U.S. Treasury Department announced Tuesday the release of $8.7 billion to help increase lending to small and minority-owned businesses and people living in poorer communities with limited access to banking.

The funds from the Emergency Capital Investment Program, which was created this year, will go to 186 community-based financial institutions. Vice President Kamala Harris and Treasury Secretary Janet Yellen discussed the investments in remarks at the Freedman’s Bank Forum, which was hosted by the Treasury Department.

“The wealth gap persists today, the homeownership gap persists,” Harris said of the need for the investments. “Black entrepreneurs are three times more likely to report that a lack of access to capital negatively affects their profit margins.”

Yellen stressed that there would be a direct link between the money being provided and businesses in local communities, saying that she recently met the owner of a tea company in Atlanta called “Just Add Honey” who lacked the financial credit to keep all her shops open during the pandemic.

“Here, it’s very easy to connect the policy with the personal,” Yellen said. “What this will do is prevent small business owners of color from closing two of their locations. And better yet, it will help people open two more.”

Black Americans represent 13.4% of the U.S. population, yet Federal Reserve figures show they control just 4.3% of household wealth. More than half of Black household wealth is in the form of pension entitlements, which cannot be passed along to future generations. This inequity makes it harder for people living in predominantly Black communities to qualify for business loans and mortgages in ways that could help build their net worth.

The $8.7 billion will be going to institutions headquartered in 36 states, as well as Guam and Washington, D.C. Roughly 54% of the funds is going to banks and 46% to credit unions. The distributions will range from more than $200 million for the largest institutions to less than $100,000 for smaller ones.

The wealth gap…the homeownership gap…it’s all due to white supremacy, right?

In the absence of whiteness, shouldn’t black businesses (and BIPOC businesses) thrive and prosper? If whiteness is the great impediment to BIPOC success, then a dearth of whiteness should immediately be a cause for the thriving of blackness and black-owned businesses.

Why is the opposite the case?

It will just take one white-owned business to sue to end this insanity on the grounds of discrimination.