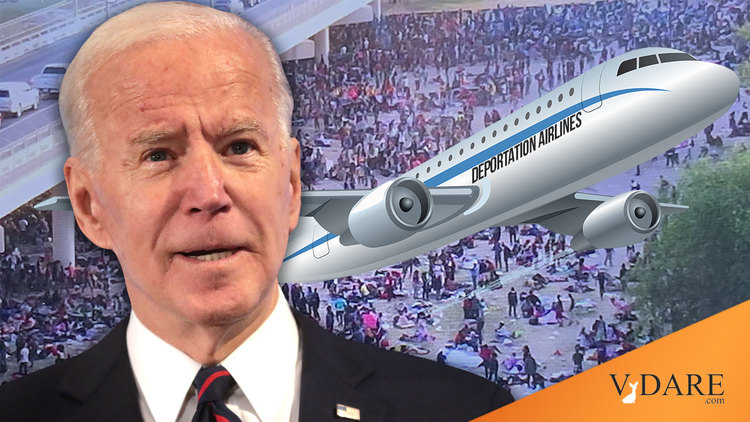 Supposedly, the Biden administration is deporting some illegal aliens after all.

So, why is the Biden administration deporting illegal aliens, but keeping it secret? It would seem that having a border is a popular thing to do. The CIS video speculates it is because the Biden administration does not want to admit that a Trump-era policy worked and they are being forced to resume it. Also, that their poll numbers on immigration are some of their worst ratings in an already bad favorability rating.

Remember that Obama had the first open border. I think his administration was amazed about how many people tried to come in. After opening the floodgates and dismantling immigration enforcement, Obama panicked at the actual numbers of aliens coming through. As Michelle Malkin documented in her book Open Borders Inc, she was getting whistleblowers coming forward to inform her about child separation during the Obama administration. Steve Bannon in his interview on PBS's series titled "Zero Tolerance" said it was Breitbart that first started reporting on the child separation during the Obama administration. There wasn't much of a stir about it at the time.

However, when Jeff Sessions came in and sought to expand the policy, then suddenly the mainstream media noticed "Kids in cages" and went into full open borders–propaganda mode. The mainstream media had a small problem with Obama doing it, but made a huge deal out of it when Sessions tried to do the same thing. The open borders lobby could use the fact that Trump and Sessions were white against them by claiming they were racists, while it would never level the charge of racism against Obama. Apparently, it's not so important that they were doing the same thing as it was that the liberal pundits could mind-read why Sessions was doing it.

Despite Obama decimating immigration enforcement, the media ran interference for him, calling him the "Deporter in Chief" while ignoring that most of his deportations were on paper and not in reality (he shifted categories of voluntary returns over to the deportation column and that instantly shot his number of deportations above any prior president's ,without him actually deporting a single alien more).

Today, the Biden administration is giving off mixed signals to illegal aliens. It is deporting some, but not others. If you make it into the interior, you likely will not be deported. It doesn't want the general public to know what is going on. I'm willing to bet based on what happened in the past that if a Republican President is ever elected again and he resumes these flights, then the left-wing game plan will shift and these flights will be all over the news, with the media claiming that the cruel and inhumane Republicans are deporting the illegals to certain death in their gang-infested home countries.

The website "Witness at the Border" that advocates for open borders is actually recording these flights and calling them "Death Flights," as if the only place to stay alive in this world is the United States. (Back to the Magic Dirt theory.)

Of course, for this small number of deportations to actually reduce the number of illegal aliens permanently, the certainty of being caught when crossing the border would have to approach closer to 90%. After being caught, the chance of being punished (deported) would have to be 100%. Unfortunately, neither is happening, since the numbers of illegal aliens still crossing are keeping a large part of the Border Patrol's workforce processing, transporting and feeding the illegal aliens. As a result not as many Agents are physically patrolling the border. Even when illegals are caught, their claims of political asylum are still keeping a lot of them from being deported. Hence, the numbers will continue for the foreseeable future.