Bethlehem Christians Face Their Own Eradication

One of the more depressing aspects of the Christmas season is the attention paid to the worsening situation of Christians who live in the Holy Land. The few remaining hope to leave, as their position becomes more tenuous with the increasing dominance of hostile Muslims.

Below, Palestinian Christians in traditional outfits participated in a procession near the Church of the Nativity in Bethlehem in 2007. 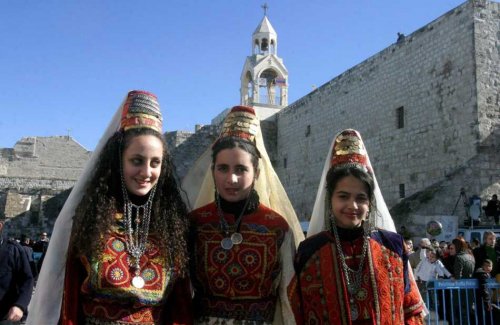 It’s tragic that after two millennia of Christian history in the land of Jesus’ birth, the descendants of the first followers are close extinction as they are being driven out by hostile Islam. But that outcome is not surprising given Muslim history. When I was in grade school, we learned that Islam was “spread by the sword” — a characterization which is unlikely to be taught in these politically correct times.

However, the record reveals that periods of Muslim calm are the exception, not the rule. The Koran directs Muslims to rule in the name of Allah, and the history of North Africa and the Middle East shows that Muslims have followed that commandment. We in the West are unwise to ignore Islam’s prime directive to engage in jihad until the entire world is Muslim.

Arab Christians will crowd into Bethlehem’s Church of the Nativity on Christmas Eve, but social and economic pressures mean they are a dwindling minority in the town where Christ was born.

Christian Arab families from Bethlehem will crowd into the town’s Church of the Nativity to celebrate Christmas Eve, as their ancestors have done for nearly 2000 years.

Midnight Mass, televised around the world live from Bethlehem, will be a moving and beautiful spectacle as it is on this night every year. But even as they celebrate in the town of Christ’s birth, many of Bethlehem’s dwindling population of Christians will be dreaming of a new life far from the Holy Land.

“Like Christians elsewhere in the Middle East, I’m not sure we have a future here,” said Jack Giacaman, the prosperous owner of a souvenir shop. He can trace his ancestors back nearly 400 years to an Italian stonemason who came to work on Franciscan churches.

“It’s not like Iraq or Syria where Christians are being killed and persecuted, thank goodness,” he said. “But there are few jobs for our community and we are under pressure from both Jews and Muslims, both of whom are becoming more religious. Some people now say Christians could even vanish from Bethlehem.”

It seems hard to believe that the Christian community is in trouble. Bells still peal out, echoing through the winding streets and on Sundays not one but two services are held simultaneously in the sprawling Church of the Nativity – a Roman Catholic one, which plays hymns on a loudspeaker outside the service, and a Greek Orthodox one next door, where the congregation listens to deep-throated singing as they are bathed in clouds of incense.

Christmas will be celebrated four times in Bethlehem in the next few weeks as the Catholic, Greek Orthodox, Syrian and Coptic churches all mark it on different dates.

Last week, as a few tour parties of tourists were venturing back after the brief Gaza war caused mass cancellations, there was a huge Christmas tree in Manger Square. The squat and massive church – one of the holiest in Christendom dating back to 339 AD – had a giant neon star shining on its roof.

“I don’t think Christians will stay here because there is no work for us,” said George, a helper at the Milk Grotto five minutes walk south of Manger Square, where the devout believe the holy family hid before their flight from the slaughter of the innocents.

Like many people in the town he preferred not to give his full name. “I have five children and I can barely earn enough to feed them. We need a miracle. It would be a terrible shame if all Christians had to leave the Holy Land, and especially the town where Christ was born. We don’t want to go – but how can we stay? I would get out if I could.”

Until the beginning of the 20th century, about one in four of the population of the Holy Land was a Christian Arab. Bethlehem was their biggest centre, and they remained a thriving community until the 1990s.

Today only about two per cent of the population of Israel and eight per cent of the West Bank is Christian. In Bethlehem they now make up only one fifth of the town’s population, and most are poor. The young and energetic would like to emigrate if they could, following uncles and cousins who have sought their fortunes overseas, especially in Chile.

“Half my family lives in Honduras now,” said Shireen Khamis, 29. Her uncle, owner of a pork butcher, will spend Christmas in Canada with another branch of the family. She has a good job as a manager with a foreign organisation and wants to stay in Palestine.

The tourists and pilgrims who stream into Bethlehem for Christmas Eve, and sit next to them during Mass, will see little of the Christian community’s problems. But if they arrive a few days early they may be shocked to see what happens in the days leading up to Dec 24 in Manger Square.

It used to be a week of solemn religious devotion and innocent wonder for all the family, but now there are several nights of rowdy partying. Rock music concerts put on in Manger Square by the Palestinian Authority attract huge crowds of boisterous young Muslim men with no interest in the spiritual experience. Christians complain that they spoil the highlight of their year.

Ursula Mukarker, 34, a psychologist who works for an organisation helping traumatised victims of violence, said: “The problem is that at Christmas many people come from the surrounding villages and most of them are men, they are noisy and a nuisance, and they don’t come to celebrate Christmas with us.

“We wouldn’t mind if they came with their families, especially with their sisters or wives. But it makes it difficult for Christian women to celebrate Christmas as we would like to.

“No woman could go alone to Manger Square now – you must have your husband, your brother or your father with you as an escort. Often the men start fights among themselves and they goad our men.

“It is particularly bad in the week before Christmas, when there are lots of events – the lights on the tree are switched on, foreign choirs come to sing carols. I would like to take my two daughters to see them but you just don’t feel comfortable to go any more. It is a pity that we cannot spend our Christmas as we wish.”

It is a common complaint made by Christians in the town, although one that few will make openly. One young man added: “Generally Muslims and Christians get on well together here. But they do not respect our religious occasions and they are not good at tolerating other cultures.

“The police do their best. But it gets worse and worse each year. Some of these youths are uncontrollable, they insult and touch our women.”

Older people say the town has changed almost beyond recognition from the Bethlehem of their youth. “Life used to be a lot easier for Christians,” said Qustandi Qaabar, 72. He ekes out a living running a small shop.

“Our town was wealthy from the tourist trade and the community used to help those who needed it. Now tens of thousands have gone abroad and there are few jobs for those of us left.”

The economic problems are particularly galling because the town should be wealthy from the coach loads of tourists who arrive daily to visit the church and holy sites.

But townspeople complain that Israeli tour guides only stop to visit the church, then quickly drive off afterwards after warning visitors that it is dangerous to explore – which is clearly untrue. Bethlehem is probably the quietest and safest city on the unstable West Bank.

Mr Qaabar’s son Ramzi, 36, a software engineer, studied in America for a while, but returned home to be with his parents, although he admits that even with a good qualification he struggles to make a decent living.

“There have always been Christians in Bethlehem and I hope there always will be,” he said.

A greater worry than making a living is political instability. The town lies on one of the most unstable fault lines in the Middle East and militant Islamism is on the march throughout the region, although Bethlehem has so far been mostly untroubled by it.
Elsewhere in the West Bank Christians have fled their homes at least partly because of threats from Islamic extremists. Nearly all the Christians from Hebron, an ancient, troubled city to the south, have moved to Bethlehem.

The Israeli occupation of their land is a more immediate problem. Bethlehem lies behind Israel’s security wall that snakes across hillsides covered with olive groves, cutting it off from Jerusalem a few miles away. “Sometimes you feel like you are suffocated here,” Ramzi Qaabar said.

“There aren’t many jobs, the Israelis can do what they like – they came into town last night and arrested some people – and then there is the Apartheid wall. There is always the fear that violence is going to start up again.”

Permits to visit Jerusalem, a few miles away, are hard to come by so family ties suffer. During the second Intifada a decade ago a wave of Christians emigrated, especially the better-off and well-educated. Dozens of residents were killed and injured during the violence a decade ago.

In 2002 gunmen who took over the Church of the Nativity were besieged by Israeli tanks for 39 days. Christian Arabs in the town claim 86 per cent of their land has been confiscated by the Israelis, most of it by the military. Israeli settlements have spread on the hillsides around the town.

Much of the land was taken for the controversial security wall, a concrete construction bigger than the Berlin Wall, with checkpoints and watchtowers, which the Israelis say had to be built to keep out suicide bombers. An extension to the wall threatens to cut off the vineyards of the Cremisan Cellars, founded by a Salesian Monastery in 1885, from Bethlehem, three miles away.

“I fear Christians will be fewer and fewer here until we finally vanish from the town where Jesus was born, which would be very sad,” said Atallah Kasis, 24, who has already tried unsuccessfully to emigrate to the USA. “But we still trust in God. That’s our last hope.”