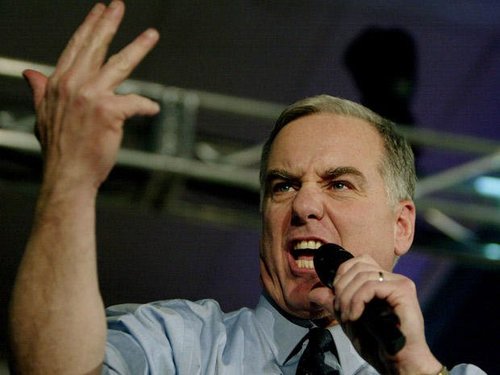 WEST DES MOINES, Iowa — … To many in this state with the first nominating contest of 2016, it was a familiar scene: a candidate from Vermont challenging the Democratic Party status quo with a lusty if slightly cantankerous presentation — and drawing huge crowds. In 2004, it was Howard Dean, the doctor and former governor of Vermont, who commanded his party’s attention with booming rallies and displays of populist passion; this summer, it is Mr. Sanders, a candidate with a similar pedigree who seems to be playing off a similar script.

Yet for all the obvious similarities, there are striking differences between the two — in their campaign appeals, ideologies and skills as candidates — which may go far in determining whether Mr. Sanders follows Mr. Dean’s trajectory: a once-hot comet who quickly burns out after Iowa.

The single biggest difference is that in 2003, Howard Dean looked like a winner. Granted, he’s no taller than Tom Cruise, but modern America is probably less prejudiced in favor of the tall than in, say, 1939. Dean’s lack of a discernible neck is a little alarming, but he was a wrestling coach. And being built like a wrestler isn’t a bad look for an insurgent candidate running on an anti-war issue.

Dean grew up Episcopalian Republican on Park Avenue and at the Maidstone Country Club in the Hamptons, but moved to a small city and (to reassure neocon conspiracy theorists about country clubs) has a Jewish wife. He had a real job as a doctor before getting into politics. All this seems like a pretty good background for a presidential candidate of the Democratic Party to get around its problem of being the Fringe Party: run a Core American who is a shorter Mr. Smith Goes to Washington-type.

Dean was the Democratic frontrunner during the second half of 2003, but when he came in 3rd in the weird Iowa caucus, the media immediately crushed him with the Dean Scream Meme. Democratic voters then went for John Kerry for a few weeks in which he built up an insurmountable lead in the overly front-loaded primaries of the 2000s. After the brief burst of Kerrymania, Kerry turned out to be a big stiff and went on to lose to the less than imposing incumbent.

Dean was given the chairmanship of the Democratic National Party as a consolation prize, and he helped the Democrats win big in the 2006 off-year elections.

Why did the media turn against Dean so violently in early 2004?

This article talks a lot about Dean’s personal volatility. Maybe …

But I’d say: most of the Establishment had more or less acquiesced in the decision to invade Iraq. The Vermont upstart’s message that President Bush should be fired for being wrong seemed to strike a lot of people with good jobs as setting an uncomfortable precedent. They’d worked a long time to get where they are and didn’t appreciate the central idea of the Dean insurgency: that important people should be held accountable.

By the way, here’s the only NYT reporter’s coverage of poor Bernie’s Speechless in Seattle experience yesterday:

In Seattle on Saturday, Mr. Sanders was confronted by protesters from the Black Lives Matter movement who climbed onstage and demanded an opportunity to talk about police brutality and to note the anniversary of the fatal shooting by a white police officer of Michael Brown, an unarmed 18-year-old black man, in Ferguson, Mo. Mr. Sanders stepped aside and finally left the event without addressing the crowd.

Nothing to see here, just move along, folks. You wouldn’t want your news to be interesting, would you?