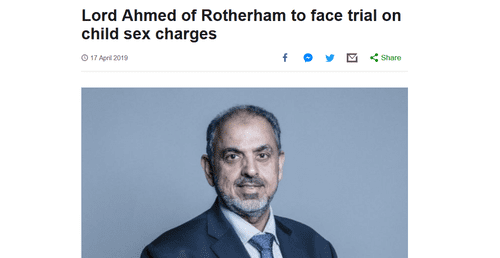 Lord Ahmed of Rotherham spoke only to confirm his name, date of birth and nationally

A member of the House of Lords will go on trial in December charged with historical sexual offences against children.

Lord Ahmed of Rotherham appeared for a brief hearing before a judge at Sheffield Crown Court.

He is charged with a serious sexual assault and indecent assault against a boy under the age of 11.

The 61-year-old is also charged with two counts of attempting to rape a girl who was under the age of 16.

The peer, of East Bawtry Road, Rotherham, appeared under his name Nazir Ahmed along with two of his brothers.

Lord Ahmed of Rotherham is a worthy representative of that name.

On Christmas Day 2007, he killed a guy with his Jaguar after sending text messages while driving. In 2013 he blamed a Jewish conspiracy for him having to go to jail for killing that guy with his Jaguar. Then in February of this year he got #MeTooed. And then in March he got charged with bisexually assaulting boys and girls under 13 in Rotherham while he was a teen.