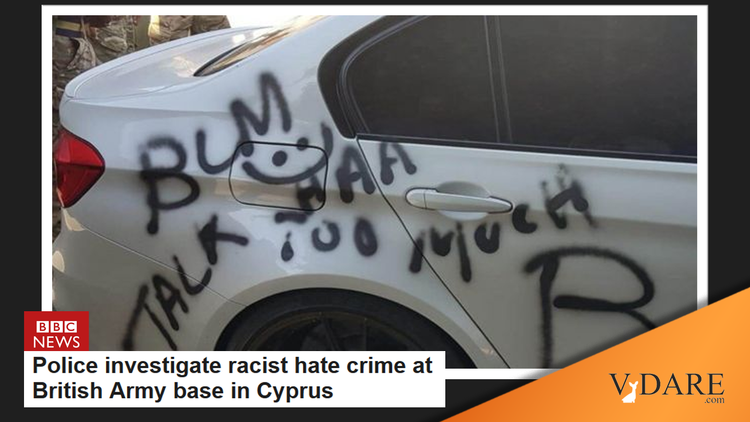 From the UK government-funded BBC; 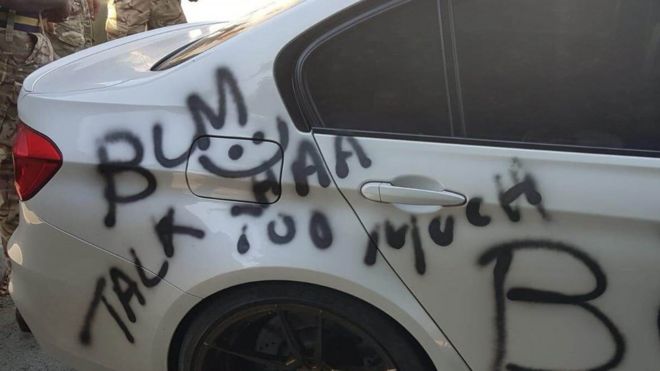 Military police have been called in to investigate a racist hate crime carried out at a British Army base in Cyprus.

A black soldier found racist graffiti sprayed on his car at Dhekelia camp, currently home to troops from 1st Battalion, The Princess Of Wales’s Royal Regiment.

After all, what white racist doesn’t want to spray paint “talk too much” on a black’s car?

Photographs show a racist word sprayed on his car.

The Ministry of Defence condemned the attack and confirmed a criminal investigation is under way.

Photographs released on social media show a white car daubed with a highly offensive racist insult along with what appears to be an attack on the Black Lives Matter movement with “All Life Matter” sprayed in black paint across the vehicle.

The BBC has confirmed the car belonged to a black soldier serving with the regiment.

The incident happened on Thursday while the vehicle was parked inside the camp behind security fencing and gates.

The racist abuse sprayed on the car includes the N-word. …

Black, Asian and minority ethnic (BAME) personnel make up just over 8% of the total armed forces – with a target to increase that proportion to 10% this year.

In other words, the vast majority of volunteers for the military in the UK are whites.

Statistics show that personnel from BAME backgrounds are more likely to complain about bullying harassment and discrimination.

In other words, nonwhites tends to be bellyachers.

Obviously, Simpson’s-related joshing is worse than slogging across the Falklands under heavy fire from the Argentinians.