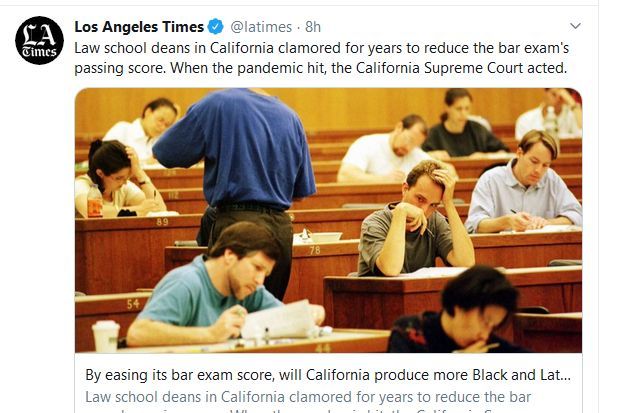 Bar Exams Are Racist: The Great 2020 Lowering of Standards Intensifies

From the L.A. Times news section:

For more than three decades, California has clung to one of the nation’s toughest testing standards for law school students hoping to practice law in the most populous state in the country.

But this month, the California Supreme Court, which oversees the state bar, agreed to lower the passing score for the exam, a victory for law school deans who have long hoped the change would raise the number of Black and Latino people practicing law….

Some speculated that the results of the February bar exam may also have influenced the court.

In February, a time when many graduates who failed the bar the first time retake it, only 26.8% of all test takers passed.

Of the first-time test takers from law schools accredited by the American Bar Assn., considered the top schools in the state, 51.7% of white graduates passed, compared with 5% of Black grads, 32.6% of Latinos and 42.2% of Asians. The bright kids tend to take and pass the July bar exam on their first try. For some reason, a huge fraction of first-time takers in July 2019 wound up in the Other ethnicity, which includes decline to state. So here is July 2018: So, 69.5% of whites from top law schools in California passed the California bar exam on their first try in July 2018 vs. 45.1% of blacks. So that’s a sizable gap but not a huge one.

But while 57% of white bar exam takers were first-timers from in-state or out-of-state ABA Approved schools, only 38% of blacks fell into that fortunate category.

Here’s the July 2018 data in a more useful format:

Whether the exam is culturally biased has been a question for law journals over the years, and critics have written that it fails to measure the real abilities required to be good lawyers.

The average national bar exam passing score is 1350. New York’s is 1330. California’s was 1440 until the court permanently reduced it to 1390. Both Chemerinsky and Mnookin estimated that change will raise the pass rate by 10%. The court did not apply the new score retroactively.

Victor D. Quintanilla, a professor at Indiana University’s Maurer School of Law and an adjunct faculty member of the Department of Psychological and Brain Sciences, said pass rates for the California bar have been falling for all applicants, but the effects of California’s particularly high test score have disproportionately hurt racial and ethnic minorities.

He is part of a foundation-funded team of law professors and social psychologists who have been studying California’s bar exam results for the last 10 years. He said 19.5% of white test takers never pass the bar even after multiple attempts. By contrast, he added, 46.9% of Black test takers and 30.5% of Latinos never pass.

Quintanilla, who also chairs the Assn. of American Law Schools section on the empirical study of legal education, said Black people and Latinos generally do worse than white counterparts on “high-stakes” standardized tests, such as the SAT.

Studies attribute the differences to disparities in educational opportunities and other socioeconomic factors. Social psychologists also have found that people of color worry when taking standardized tests if the results might reinforce negative stereotypes, and that anxiety hurts their performance, Quintanilla said.

“There is social psychological research that shows that even when people of color take an exam and do well, that exam may not reflect their true potential,” said Quintanilla, who has a law degree and is getting his doctorate in social psychology.

The team studying the bar, which includes faculty from Stanford University and USC, will deliver findings to the California Supreme Court next month. Quintanilla said he was glad that the court lowered the score, but added: “It is clear from the data that there are substantial benefits to be gained by moving further still.”