In Manhattan on Tuesday, young British tourist Sian Green (shown below) was hit by a cab which careened onto the sidewalk at a high rate of speed. The woman lost her foot by the force of the auto running into her, but her bleeding was quickly slowed by concerned bystanders and celeb physician Dr. Oz. She is now recovering at a local hospital although the doctors were unable to reattach her foot. 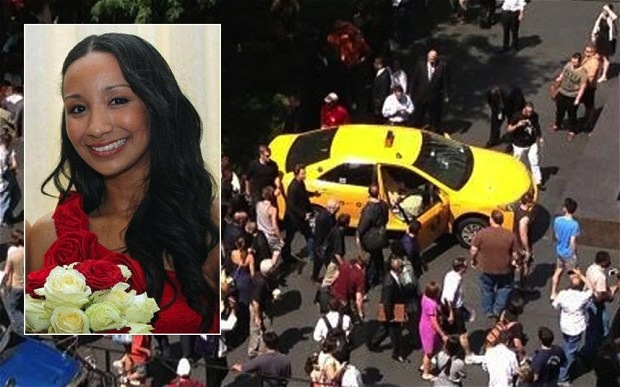 The crash has been characterized as an incident caused by anger run amok, since the driver was irritated by a bike messenger getting in his way: British victim of New York road rage (Daily Telegraph). 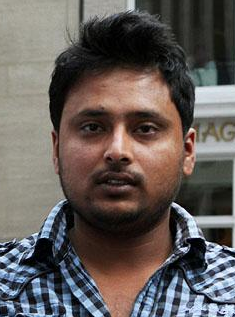 The cab driver, Bangladeshi immigrant Mohammed Faysal Himon (pictured), now admits that he has anger-management issues and probably should choose a different occupation. In addition, he was not properly licensed to drive the cab which maimed Sian Green.

This case is another reminder of the foolishness of Washington admitting thousands of Muslim immigrants every year, when they continue to fail assimilation on a number of fronts. Muslims are taught from childhood that they are the superior beings on the planet and lowly infidels should make way for them. As a result, many sons of Allah have a supremacist worldview which when questioned often makes them fly into a rage against non-Muslims.

Is cab driving a job Americans won’t do, particularly when over 20 million citizens are jobless? It’s a terrible shame that a young woman is now maimed for the rest of her life because a Muslim cabbie couldn’t deal with the normal irritant of annoying bike messengers. The city is considering the removal of Himon’s license, and hopefully a criminal charge may be forthcoming after more investigation, as noted below.

The road-rage cabby who jumped a Midtown curb and crushed a young British tourist admitted yesterday he’s a lousy driver who has no business behind the wheel.

“I don’t want to drive a taxi,” Mohammed Faysal Himon, 24, told The Post in an exclusive interview from a relative’s home in The Bronx.

Himon — who was not authorized to drive the cab that slammed into Sian Green, 23, likely costing her both legs — copped to a previous laundry list of moving violations, including an accident that injured a passenger in 2010.

“I need a more suitable job. There’s too much stress when you’re driving in the city,” Himon said.

The careless cabby could be looking for that job very soon. The Taxi and Limousine Commission has taken the initial steps in suspending his license, according to an agency spokesman.

In Tuesday’s Midtown accident, the third-year hack was hit with only a summons, but he could be on the hook for felony charges once the investigation is completed, cops said yesterday.

“The investigation is going forward,” Police Commissioner Ray Kelly said. “Collisions, accident investigations, take some time. It takes some time to do that and reconstruct the scene.”

Sources told The Post that investigators were already poring over extensive surveillance video from the crash scene.

Himon, a native of Bangladesh who has been in the United States for nearly five years, admitted he flew into a fit of road rage when he and bike messenger Kenneth Olivo crossed paths.

“He was in my way and I got upset, so I gave him notice that I wanted to pass through,” he said, meaning he leaned on his horn.

“He started pounding on my car with his hands and was yelling things at me. I suddenly felt like I had to get out of there. It was becoming a bad situation. So I accelerated to get in front of him.”

At that point, Himon went on, “everything becomes cloudy” as he crashed into Green, who was munching a hot dog with her best pal, Keshia Warren, at the northwest corner of Sixth Avenue and 49th Street, near Radio City Music Hall.

“I don’t know how, but I just lost control of the car,” Himon said. “I was in shock.When I crashed, I didn’t even see the lady. At first, I didn’t think I hit anyone, then I saw her foot by my car. I can’t get it out of my mind.”

The sight of the severed left foot freaked him out, he said.

“It was so disturbing. I was afraid I was going to lose all my senses. When I saw her leg, I froze. I couldn’t walk or talk,” he said.

Still, he referred to the accident “a disaster for me. Someone lost a part of their leg because of all this.”

A witness made sure Himon wouldn’t try to slip away as a horrified crowd gathered.

“A random pedestrian came up to me and said, ‘Give me your keys! Stay in the car!’ ” Himon recalled.

Even though he admitted losing his cool, he blamed the bicyclist, who has a long rap sheet and may also face charges in the crash.

“I personally feel that if that man on the bike didn’t bang on my car, maybe this would not have happened,” Himon said. “I didn’t yell at him. I had my windows up and my A/C on. I could barely hear what he was saying.

“I thought to myself, ‘This guy isn’t any good. I need to speed up to get away from him.’ I accelerated, and the rest is hard to remember.”

Himon also claimed that the bikes lanes the Bloomberg administration installed in recent years contributed to the crash.

“A lot of bikers disregard the bike lanes and drive wherever they want,” he griped.

“The city wastes a lot of money by giving them all these bike lanes, and for what? Honestly, I have no problem with bikers. They should just stay in their lane and I’ll stay in mine.”

Asked why he worked as a taxi driver if he knew he was a menace behind the wheel, he replied, “I need to make a living. I just needed to do something to support my family.”

Himon’s 2010 crash, which injured a passenger, took place in the year he received his hack license, records show.

He was also cited for improper use of a bus lane that year, and fined $50.

He racked up three moving violations the next year and received a total of nine points on his license, as well $415 in fines.

Those infractions included running a red light, driving 65 mph in a 45-mph zone and making an improper turn.

He did get a two-point reduction from his license once, for taking a defensive-driving course, according to records.