The good news: assimilation is taking place in Los Angeles. The bad news: the culture being internalized is that of Mexico, not America.

Many jobs are so dominated by Mexicans that they feel they can keep out any uncool Salvadorans, etc. who would mess up the little Mexico vibe that is apparently so important. Some Central Americans feel they have to pretend to be Mexicans to get work. The Salvadoran man featured in this article feared he might be beaten up if his Mexican workplace colleagues discovered his true nationality.

Teddy Roosevelt warned us against "squabbling nationalities" but Washington thought it knew better.

Juan Carlos Rivera knew that if he wanted to get a dishwashing job at the MacArthur Park hamburger stand, he would have to pretend to be Mexican.

But the thought of lying made the Salvadoran anxious. He paced outside the restaurant, worried that his melodic Spanish accent, his use of the Central American vos, instead of the Mexican tu, would give him away.

Resolving to say as little as possible, Rivera remembers steeling himself and stepping inside — into the world of Mexicanization.Â [...]

Rivera and thousands of other Central and South American immigrants have left their native countries only to arrive in an American city dominated by Mexicans, who comprise L.A.'s largest Latino group and have access to most of the jobs sought by immigrants. The metropolis drives many to Mexicanize, to degrees big and small, often before they start to Americanize. [Central American immigrants adopt Mexican ways in U.S., Los Angeles Times, November 3, 2008]

Since the story is published in the LA Times, no friend of traditional assimilation, the tone is one of intellectual curiosity only. The idea that immigrants should accept the values and language of the national community — as desired by the majority of citizens — doesn't enter in at all. 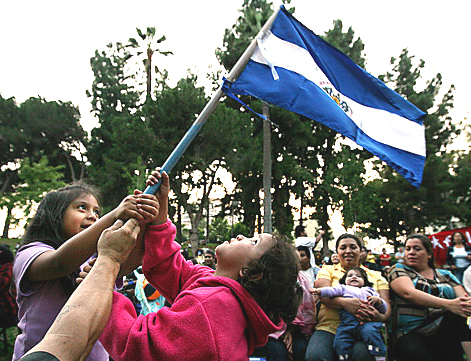