Back to School Countdown: 30,000 Non-English-Speaking Alien Kids Are Redistributed around America

The first day back to school is looking pretty dreadful for many American kids, who will experience more diversity in their classrooms with resources stretched to the limit because of 30,000 young illegal aliens being dumped around the country by the administration. 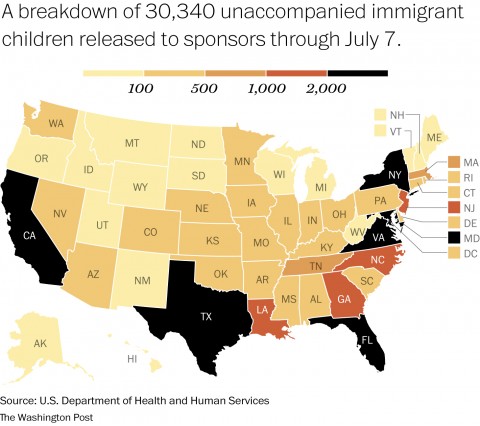 US citizen students will get less because the dumped illegal alien kids need more, and they will get it — free food, clothing, medical care and Spanish-speaking teachers and counselors for Central kiddies who know more than their indigenous language.

Florida schools get ready for flood of border kids, July 25, 2014

Border kids costs more to educate, about $1,900 per head. Teachers must be bilingual. The students will need health care and psychological services because many arrive sick and traumatized by things they’ve seen and experienced on their journeys north.

On a Sunday Fox News segment, documentary filmmaker Dennis Michael Lynch pointed out the dangers to public health created by Washington’s open borders, noting that 85 percent of the crossers are family units with at least one adult who are simply released into the general public. “With school starting in next month we’ve got ourselves a real problem because these people are carrying those same diseases, yet nobody has checked them for it… Now these children are all starting to go to school in the beginning of September,” Lynch remarked. The illegal alien students will not be required to show they have necessary shots because they will all arrive at once and the normal screening system will collapse.

I would love to see a poll of parents with kids in K-12 public school and how the family feels about their youngsters being both endangered and shortchanged. Another interesting fact will be how many American kids are transferred to private schools this fall.

The Central American student “have very, very limited amounts of education [and] in some cases, they cannot count to 10,” said Caroline Woodason, assistant director for student support at the public schools in Dalton, Ga. “They can’t turn on a computer. They’ve never even seen a computer,” she told the Dalton Daily Citizen.

In Fairfax, Va., “teachers [are] dealing with children not just learning English but years below expected grade/achievement level,” education specialist Robin Hamby, told The Washington Post. In early 2014, her district already had 5,192 Central American students, up 22 percent since 2011.

In Lynn, Mass., the foreign youths “are not literate in any language,” said Catherine Latham, the superintendent of schools. “The school system is overwhelmed, our health department is overwhelmed,” she told Fox News in Boston.

“There’s no way a [foreign] child is going to be able to come to school ready and able to learn if we don’t address some of the other issues they’re facing,” such as an upbringing in a violent culture, Debra Duardo, executive director for human services for the huge Los Angeles Unified School District, told the Chicago Tribune.

The migrants cross the border illegally, so they’re not immigrants. They’re foreign students, and they’re arriving as U.S. students’ test scores are already stagnating in comparison with the rest of the world.

U.S. students are facing rising pressure from an increasingly high-tech economy, competition from students in Japan and China, plus eventual competition for jobs from unemployed Americans and the 1 million immigrants and 800,000 guest-workers who arrive each year.

The arrival of the American students’ new classmates was highlighted July 25 when Obama’s agencies announced he had already distributed 30,340 foreign youths and children by July 7.

Virginia received 2,234 foreign students and Maryland got 2,205, according to the announcement from the Department of Health and Human Services. Texas got 4,280 foreign students, North Carolina got 1,191, and New Jersey got 1,504, said the government statement.

Those numbers may double by October, however.

More than 50,000 Central American children and youths have crossed the border since October with the aid of smugglers, usually working under a contract with their parents. More that 90 percent say they are teenagers, and more than 95 percent are being released by Obama to their U.S.-based parents or relatives, many of whom are illegal immigrants.

Another 50,000 Central Americans have crossed in so-called “family units,” of at least one parent and child. A few of those are being repatriated, some are being held in government facilities, but many have been bussed or flown to cities where they want to live, despite widespread protests from worried Americans.

More migrants are expected to cross before winter sets in, and next’s year’s inflow is expected to be much larger than this year’s flood, unless the federal government sharply changes its immigration enforcement policies.

R0ughly 30,000 Central Americans children and youths arrived from 2012 to September 2013. Most of them are enrolled in U.S. schools, including some who are believed to be over 18.

The migrants are supposed to face a possible deportation after a hearing in immigration courts. But the courts’ schedules are backed up for months or years.

Judging by government data, many will be granted Green Cards, few will be deported, and many of those who lose their court cases won’t be deported for at least several years.

That population of illegal immigrants is roughly equal to all Americans aged 16, 17 and 18.

Obama’s pro-migrant policy is increasingly unpopular among every group of Americans — including whites, Latinos and African Americans — except for Obama’s base of progressives. In July, Gallup reported that immigration was identified as the nation’s most important political problem by Americans.

A CNN/ORC poll released July 25 reported that 62 percent of adults said they favored “a bill that would make it easier for the U.S. to deport all unaccompanied children who have entered the country illegally.” Only 36 percent disagreed with the question. Overall, the poll showed a 19-point shift since February 2014, in favor “a plan for stopping the flow of illegal immigrants into the U.S. and for deporting those already here.”

The wave of children, who are either accompanied by paid smugglers or by their mothers, are coming from three countries — Honduras, El Salvador and Guatemala, which has the lowest literacy rate in Central America.

Those countries’ populations are poor and uneducated, and are beset by violent youths, which have made Guatemala and Honduras two of the most violent countries in the world.

None of the migrants are legal immigrants, and some have criminal records.

Obama’s deputies aren’t blocking the release of youths with criminal records in Central America. Instead, they’re releasing them to the custody of their parents and relatives, who will likely send them to schools.

“Jose Enrique, 16, has ‘severe substance abuse’ issues, self-mutilates, and has demonstrated ‘very aggressive’ and ‘vicious’ behavior,” according to a federal report leaked to The Blaze. “I sent for him because after my mother died I wasn’t sure what was happening with him,”his mother told The Blaze.

Many of the foreign children do not speak English or even Spanish.

In Dalton, the new students are from El Salvador and Guatemala, and “in most cases,” speak Indian languages, said Woodason.

In Fairfax, “few speak English, some know only indigenous languages for which translators are in short supply… [some] haven’t attended school for years,” said one Washington Post article.

The foreign students are already dragging down average scores in Lynn and Fairfax county.

In Fairfax, one of the local middle-schools has even given up trying to set homework because it is handling so many foreign children.

In Lynn, many migrant students have to repeat ninth grade, and district-wide test scores are falling, Latham said.

“There is no way these children can be in biology, U.S. history or any other high school course at our current schools,” said Dalton’s Woodason.

That’s not a problem for President Obama. He’s facing his last election this November, and he’ll be out of office on Jan. 20, 2017.

But it’s a problem for American kids, their parents, and eventually employers and welfare officers. “Once the [foreign] kids are here, they’re ours,” Hamby said.