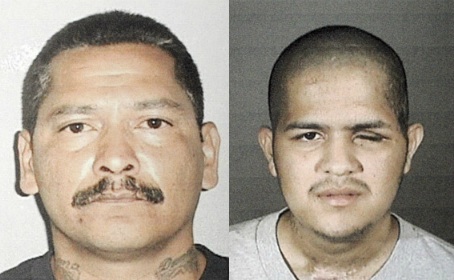 In June 2011, around 50 Azusa 13 members were charged by the feds using RICO in order to crack down on the gang’s campaign of threats and violence against blacks, as directed remotely by the Mexican Mafia prison gang. The charges were the result of a years-long investigation into the Hispanic gang’s terrorist strategy to force blacks to leave. Diverse mug shots of the indicted 51 may be viewed here.

People are getting killed in the LA race war of Hispanic gangs against black Americans. Two well publicized victims were Jamiel Shaw, 17, and Cheryl Green, 14, a couple of kids with no gang affiliation, who were in the wrong place when hostile Hispanic gangsters were intent on marking territory. But other city residents have been killed in race-based gang attacks with much less attention.

Certainly if a group of white guys used violence to chase blacks out of their town, the media would be shrieking with shock and anger. But it’s Hispanics who are shooting blacks, so the national press is not interested.

A leader of the Azusa 13 street gang and his son were sentenced in federal court Monday to lengthy prison terms after pleading guilty to conspiring to attack blacks and force them to leave the city.

Santiago “Chico” Rios was sentenced to 19 years and seven months in prison by U.S. District Judge Gary A. Feess. His son, Louie “Lil Chico” Rios, who is hearing-impaired and required a sign-language interpreter, received a 10-year sentence.

Both Rioses have “Azusa” tattooed above their upper lips. Louie Rios has “Azusa gang member” tattooed on the back of his head.

At sentencing, Feess said Santiago Rios was a “proponent of the racial cleansing of the city of Azusa” and an admitted participant in “every significant aspect of the gang’s activities.”

The Rioses and 49 other Azusa gang members were arrested in June 2011 and charged with, among other things, a conspiracy to “cleanse” Azusa of its black residents, according to prosecutors.

All 51 have been convicted. Eight remain to be sentenced, said Reema El-Amamy, the federal prosecutor in the case.

Santiago Rios was a reputed Azusa 13 “keyholder” — a shotcaller anointed by the Mexican Mafia prison gang to tax drug dealers, sell drugs and funnel the proceeds to Mafia members, according to a federal plea agreement.

In that position, he implemented an Azusa 13 policy dating from 1992 of targeting and harassing black people in Azusa, according to the agreement. The push to attack blacks was allegedly instigated by Ruben Rodriguez, a Mexican Mafia member from Azusa who has since died.

The gang would assault blacks they spotted in public places and spray racist graffiti. Some gang recruits were asked to attack blacks as a way of proving their worth to Azusa 13, according to the plea agreement.

When several gang members were released on parole in 1999 and 2000, normally quiet Azusa saw its hate-crimes rate skyrocket over the next three years, as gang members attacked black residents.

In one case, a 49-year-old woman was shot and wounded outside her apartment as she was saying goodnight to a friend. A gang member later testified that a group of Azusa 13 members had shot her after going “hunting” for blacks and finding no men to shoot.

The city formed a hate-crimes task force, then a Human Relations Commission. It began an annual “Hands Across Azusa” multicultural celebration on Martin Luther King Jr.’s birthday. The celebration takes place at 1 p.m. Sunday . in front of City Hall.

In an undercover operation, the Azusa Police Department set up a storefront called A Peace of Africa, stocked with goods from Africa, hoping to entice the gang into committing a hate crime. Black undercover officers staffed the store and police staked it out around the clock, but lack of funding forced the department to close the store before any crimes were committed.

Azusa police arrested several of the recent parolees, who are now serving lengthy prison sentences. Federal prosecutors then mounted a broader case against the gang that culminated in the 2011 arrests.

Since then, police have reported no hate crimes connected to the gang.