One of the first theories many immigration patriots first get introduced to is the idea of Aztlan, what many Chicano activists call the American Southwest. Aztlan is supposed to be a newly independent Chicano homeland someday, the ethnostate for Mestizos eager to throw off the American Empire and set up their own republic of blood and soil built upon the old identity of the Aztecs.

Not surprisingly, the Southern Poverty Law Center calls this idea simply a "conspiracy theory" made up by "nativists" [Exploring Nativist Conspiracy Theories Including The 'North American Union' And The Plan De Aztlan, by Heidi Beirich, Southern Poverty Law Center, July 1, 2007]. It certainly sounds unrealistic. But it's an idea that keeps popping up in "pro-immigration" protests.

Take this little aside from the May Day protests in Seattle.

Hundreds of families, students and activists marched peacefully from the Central District to downtown Seattle on Sunday, calling for changes in the laws that make it difficult for immigrants to gain citizenship here.

The May Day March for Workers and Immigrant Rights began with a two-hour rally in Judkins Park.

At 3 p.m., marchers took to the streets as part of a police-escorted, permitted march to the U.S. Courthouse downtown. 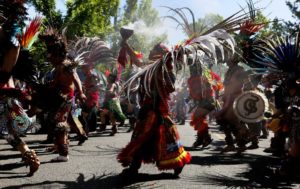 An Aztec dance troupe led the marchers, burning incense and dancing to the beat of drums. Mothers and fathers pushed children in strollers down Broadway or carried toddlers on their shoulders.

[Hundreds rally, march in Seattle for labor, immigration reforms, by Katherine Long, The Seattle Times, May 1, 2016]

(One would think an imperialist empire which practiced human sacrifice against other indigenous peoples, wouldn't be the best cultural identity to adopt. But never mind.) 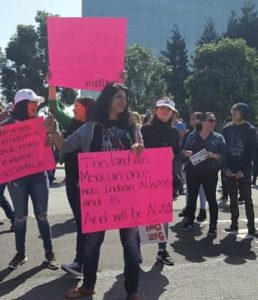 Or look at the repeated use of "Aztlan" as a rallying cry at Leftist protests around the country over the last few days, especially in California ['Make America Mexico Again': We Warned You About America-Hating Mobs, by Lee Stranahan, Breitbart, April 30, 2016]

Does this mean that the American Southwest is literally going to be cut away from the United States? Not necessarily. It simply shows that there is a new national consciousness being created among many Mexican-Americans, one diametrically opposed to a common American identity. It's something which shows that the "melting pot" has ceased to function. And that's not a conspiracy theory. That's something you can see happening at every pro-immigration protest or in "Chicano Studies Departments" all around this country.