Last February, millions watched a video of Boston Dynamics’ amazing Atlas robot as it walked with ease through a snowy landscape.

Did you see it? Watch that video here. 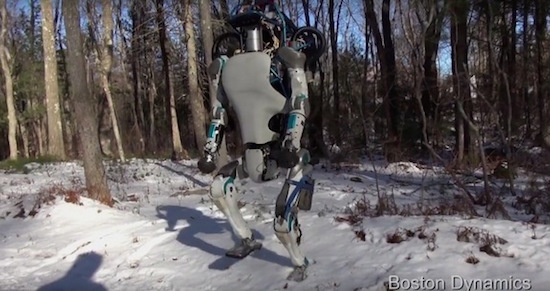 Now the company is back with an even more advanced machine — SpotMini — that can grasp and place a wine glass into a dishwasher without breakage, as well as trot along, deliver a beer and quickly get up after slipping on a banana peel.

The company includes this explanatory blurb with its video:

SpotMini is a new smaller version of the Spot robot, weighing 55 lbs dripping wet (65 lbs if you include its arm.) SpotMini is all-electric (no hydraulics) and runs for about 90 minutes on a charge, depending on what it is doing. SpotMini is one of the quietest robots we have ever built. It has a variety of sensors, including depth cameras, a solid state gyro (IMU) and proprioception sensors in the limbs. These sensors help with navigation and mobile manipulation. SpotMini performs some tasks autonomously, but often uses a human for high-level guidance. For more information about SpotMini visit our website at www.BostonDynamics.com

SpotMini is a smaller, quieter version of the carry-all robot that was rejected by the Marines for being too noisy. SpotMini is designed with home use in mind, and people don’t want a loud machine clanking around the place.

The ability of SpotMini to manipulate a wine glass safely shows how rapidly human-like dexterity is being developed, and that capability is the Holy Grail for business. Once machine smarts can be married up with the precise movements of the human hand, then many more jobs will be transferred to the automation column, like picking vegetables, sewing clothing and packing customer orders into boxes in an Amazon warehouse.

Speaking of Amazon, that company has grown enormously from its use of increasingly automated processing centers where Kiva robots deliver ordered merchandise to human workers who load boxes for shipment. CEO Jeff Bezos wants to automate further, as shown by the Amazon Picking Challenge, a competition to develop a dexterous robot that can replace the humans (and their amazing hands).

The trend in the economy is for more automation and fewer workers. The May employment statistics showed a record 94.7 million working-age Americans not present in the workforce. Surely there has been a cumulative effect of decades of industrial outsourcing and immigration, plus automation now added to the mix of job-killing policies and technology.

In 2013, two Oxford University researchers forecast that nearly half of US jobs might be automated or computerized within 20 years. The Gartner tech consultants predicted in 2014 that one in three jobs will be done by machines by 2025. Those forecasts don’t look out of line with what we see today.

For sure, immigration of cheapie foreign workers for “jobs Americans just don’t want” (a questionable concept anyway) is a relic from the 20th century, because machines are doing those unpleasant jobs now. Therefore: