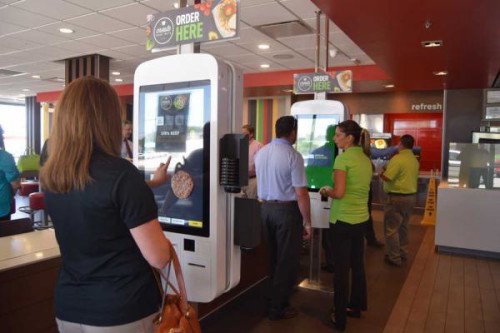 Tablets or kiosks for ordering are an easy first step in restaurant automation, being relatively inexpensive, and have been introduced in McDonalds, as shown above.

Talk about shooting yourself in the foot: fast-food workers have not been paying attention to what is happening in their industry — that automation is coming on strong — and their ignorance is about to bite them. Business owners have looked at worker demands for $15/hour versus the cost of burger-making robots, and the machines will likely be brought in sooner than they would have otherwise. This development was obvious and predicted earlier.

The brief video below quotes Alexandros Vardakostas, the creator of the robot hamburger maker, who remarked, “The device isn’t meant to make employees more efficient, it’s meant to completely remove the need for them altogether.”

It’s criminal that left-wing activists have sold out the workers over unrealistic pay raises. Seattle required local wages be $15 and small businesses have closed as a result. Doubling the minimum wage will do that.

Teen unemployment is bad and getting worse because of immigration, automation and now crazy wage demands causing more rapid entry of smart machines into the workplace. Youth unemployment keeps young people from getting the first step on the jobs ladder because of the rapidly changing workplace and ignorant reactions to those changes.

The article below provides a brief history of how fast food became less hands-on over decades, requiring fewer workers. The fast-food industry employs millions now, but is on the verge of downsizing considerably.

And remember, the chainsaw reduction of jobs caused by automation is only beginning. The technology is expanding in ways that are hard to imagine. Oxford University researchers estimate that 47 percent of US jobs are at risk for some form of automation by 2033.

Further immigration is therefore unnecessary and unwise. We will need every single one of those remaining jobs for Americans.

Crowded. That’s how Ed Rensi remembers what life was like working at McDonald’s in 1966. There were about double the number of people working in the store — 70 or 80, as opposed to the 30 or 40 there today — because preparing the food just took a lot more doing.

“When I first started at McDonald’s making 85 cents an hour, everything we made was by hand,” Rensi said — from cutting the shortcakes to stirring syrups into the milk for shakes. Over the years, though, ingredients started to arrive packaged and pre-mixed, ready to be heated up, bagged and handed out the window.

“More and more of the labor was pushed back up the chain,” said Rensi, who went on to become chief executive of the company in the 1990s. The company kept employing more grill cooks and cashiers as it expanded, but each one of them accounted for more of each store’s revenue as more sophisticated cooking techniques allowed each to become more productive.

The industry could be ready for another jolt as a ballot initiative to raise the minimum wage to $15 an hour nears in the District and as other campaigns to boost wages gain traction around the country. About 30 percent of the restaurant industry’s costs come from salaries, so burger-flipping robots — or at least super-fast ovens that expedite the process — become that much more cost-competitive if the current federal minimum wage of $7.25 an hour is doubled.

“The problem with the ­minimum-wage offensive is that it throws the accounting of the restaurant industry totally upside down,” said Harold Miller, vice president of franchise development for Persona Pizzeria, who also consults for other chains. “My position is: Pay your people properly, keep them longer, treat them right, and robots are going to be helpful in doing that, because it will help the restaurateur survive.”

Many chains are already at work looking for ingenious ways to take humans out of the picture, threatening workers in an industry that employs 2.4 million wait staffers, nearly 3 million cooks and food preparers and many of the nation’s 3.3 million cashiers.

The advent of fast-food chains may have ushered in an era of new efficiencies, but the industry as a whole has largely been resistant to cuts in labor. According to the Bureau of Labor Statistics, since 1987, labor productivity in ­limited-service restaurants has grown at a rate of only 0.3 percent per year, which is low compared with most other industries.

The market research company IBISWorld has calculated that the average number of employees at fast-food restaurants declined by fewer than two people over the past decade, from 17.16 employees to 15.28. And restaurants tend to rely more on labor than other food outlets: According to the National Restaurant Association, dining establishments average $84,000 in sales per worker, compared with $304,000 for grocery stores and $855,000 for gas stations.

Labor isn’t the only ingredient that factors into the price of a Big Mac: There’s also real estate, which has been getting more expensive, especially in the hot urban markets where restaurants are seeking to locate. Wholesale food costs, meanwhile, have escalated 25 percent over the past five years.

The avalanche of rising costs is why franchisers are aggressively looking for technology that can allow them to produce more food faster with higher quality and lower waste. Dave Brewer is chief operating officer with Middleby Corp., which owns dozens of kitchen equipment brands, and is constantly developing new ways to optimize performance and minimize cost.

“The miracle is, the wage increase is driving the interest,” Brewer said. “But the innovation and the automation, they’re going after it even before the wages go up. Why wait?”

All that innovation helps restaurants streamline other parts of their operations — and draw more customers. Electronic menus can be constantly updated so that items that are out of stock can be removed. Connecting the point of the sale to the oven’s operating system allows precise amounts of food to be cooked, which helps cut down on costs. Other inventions save energy, reduce maintenance and better dispose of grease. On the digital side, restaurants are working on apps that include reward systems and location tracking that prompt customers to eat with them more frequently.

It’s possible that new inventions could start to eliminate positions faster than they have in the past.

The labor-saving technology that has so far been rolled out most extensively — kiosk and ­tablet-based ordering — could be used to replace cashiers and the part of the wait staff’s job that involves taking orders and bringing checks. Olive Garden said earlier this year that it would roll out the Ziosk system at all its restaurants, which means that all a server has to do is bring out the food.

Robots can even help cut down on the need for high-skilled workers such as sushi chefs. A number of high-end restaurants use machines for rolling rice out on sheets of nori, a relatively menial task that takes lots of time. Even though sushi chefs tend to make more than $15 an hour, they could be on the chopping block if servers need to make $15 an hour, too.

“For our operation, we’re not buying entry-level labor, but if entry-level labor goes up a huge amount, everything goes up,” said Robert Bleu, the president of True World Group, a seafood distributor and consultant that also owns a sushi restaurant in Chicago. “I don’t consider rice-forming a high art. You can escape some of the drudgery.”

Of course, it’s possible to imagine all kinds of dramatic productivity enhancements. Persona ­Pizzeria’s Miller predicts that drone delivery systems will eventually get rid of the need to come into a restaurant at all, for example. Brewer has a bold prediction: He thinks that all the automation working its way into restaurants could eventually cut staffing levels in half. The remaining employees would just need to learn how to operate the machines and fix things when they break.

“You don’t want a $15-an-hour person doing something that the person who makes $7 an hour can do,” Brewer said. “It’s not downgrading the employees. It’s that the employees become managers of a bunch of different systems. They’ll become smarter and smarter.”

The value of a human touch

Not everybody, however, agrees that machines could make that much of a dent in labor costs. Implementing new systems is expensive, and mistakes can be devastating. And for some concepts, it’s possible that the presence of employees is actually a restaurant’s competitive advantage. Compared with grocery stores and gas stations, many people come to restaurants exactly because they want some human interaction.

Andy Wiederhorn, chief executive of Fatburger — who is testing tablet systems in his sit-down chain, Buffalo’s Cafe — doubts improvements in technology are going to be enough to keep up with the mandated wage increases, especially when actual people can be his best sales tool.

“I think that tablets have a place at the table, but it’s pretty hard to ask questions, get suggestions from a tablet. I don’t think they replace a server, they make a server more efficient,” Wiederhorn said. “We’re selling hamburgers shakes and fries, and [customers] want to talk to somebody and say, ‘Here’s how I want it.’ So I think in the hospitality industry, to assume that technology will take the place of workers is a false assumption.”

That’s why some restaurants have tiptoed in the direction of increased automation, rather than sprinted, even as minimum-wage hikes loom.

“Because the industry remains overall an industry of hospitality, their challenge remains how to remain high-touch in a high-tech environment,” said Hudson Riehle, the National Restaurant Association’s senior vice president for research and knowledge. If they’re not careful, restaurants could jettison the one thing that kept people coming through the doors.

“Being a service industry, and the need to deliver a personalized experience, means that many of the restaurant operators focus on ensuring that the overall customer experience remains competitive,” Riehle said.