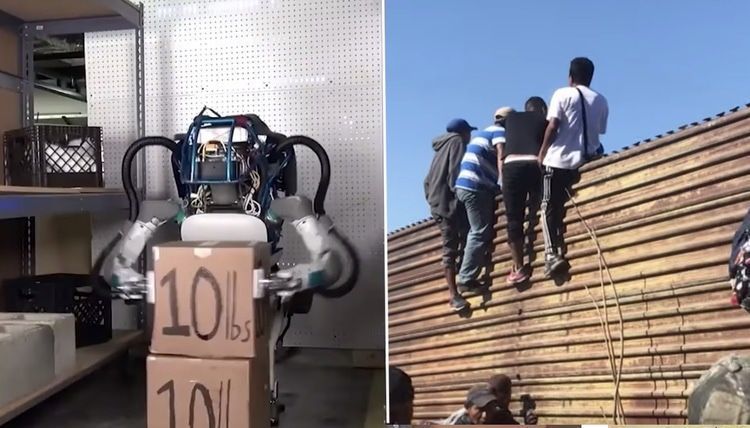 Forbes provides a review of expert opinions about how the new automation/AI is going to roll out regarding the jobs economy over the next years. It notes the dire early predictions of mass unemployment, but tries to provide a balance with more upbeat forecasts of new jobs being created in the tech economy.

In fact, the many thousands of non-English-speaking unskilled Third-Worlders who have flooded across America’s open border won’t be employable in a few years when automation and artificial intelligence hit big.

Below, a predictive chart from a PwC report How will automation impact jobs? shows increased use of smart machines while America’s open borders welcome unskilled foreigners from abroad.

Thanks to President Trump in the White House, America’s employment economy is booming. However, when a smart machine becomes less expensive performing a job than a worker, then the human will be replaced: that’s market reality.

A great compilation of reports outlining impacts and perceptions of #AI and #Automation on the #FutureofWork https://t.co/4vT7yL457D via @Forbes @GilPress

Amazon announced last week that it will spend $700 million to train about 100,000 workers in the US by 2025, helping them move into more highly skilled jobs. The New York Times observed that with this program Amazon is acknowledging that ”advances in automation technology will handle many tasks now done by people.”

The number of jobs which AI and machines will displace in the future has been the subject of numerous studies and surveys and op-eds and policy papers since 2013, when a pair of Oxford academics, Carl Benedikt Frey and Michael Osborne, estimated that 47% of American jobs are at high risk of automation by the mid-2030s. Here are a few more recent examples of what has become a popular number-crunching (automated, computerized, AI-driven) exercise:

McKinsey Global Institute: between 40 million and 160 million women worldwide may need to transition between occupations by 2030, often into higher-skilled roles. Clerical work, done by secretaries, schedulers and bookkeepers, is an area especially susceptible to automation, and 72% of those jobs in advanced economies are held by women.

Oxford Economics: up to 20 million manufacturing jobs worldwide will be lost to robots by 2030.

McKinsey Global Institute: at the high end of the displacement by automation spectrum are 512 US counties, home to 20.3 million people, where more than 25% of workers could be displaced. The vast majority (429 counties) are rural areas in the Americana and distressed Americana segments. In contrast, urban areas with more diversified economies and workers with higher educational attainment, such as Washington, DC, and Durham, NC, might feel somewhat less severe effects from automation; just over 20% of their workforces are likely to be displaced.

But other reports provide a more positive take:

McKinsey Global Institute: worldwide, with sufficient economic growth, innovation, and investment, there can be enough new job creation to offset the impact of automation, although in some advanced economies additional investments will be needed to reduce the risk of job shortages. In the US, there will be net positive job growth through 2030.

By way of explaining the more positive take on the future of work, a recent Forrester report (Future of Work) argues that “automation is not a singular trend,” and that future scenarios are influenced by the varying fortunes of a number of trends such as the gig economy, the destruction of industry boundaries, and the increasing desire for privacy and transparency. “You can argue that automation will open the aperture to new, previously unthinkable business opportunities as well as be the necessary engine to execute on business strategy,” says Forrester.

Dismissing “apocalyptic scenarios that endanger fear,” Forrester outlines its recommendations in terms of government policy (understand faster technology’s impact), economic planning (maximize opportunity while minimizing impact on local jobs), business planning (good-by graceful planning cycles, hello disruptive forces), and leadership planning (learn to manage humans and machines).  Most important, for individuals: “As much as companies must become learning institutions, so must employees become learners — learning core skills, adapting to new working models, and understanding what it means to be ready and fit for the future, maximizing their Robotics Quotient.” (Continues)