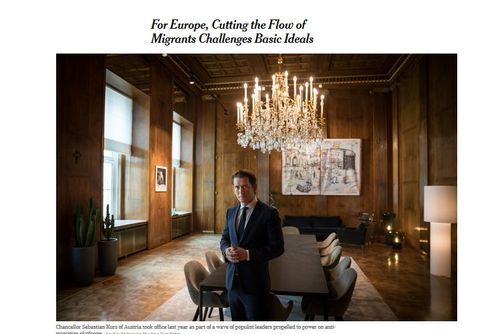 For Europe, Cutting the Flow of Migrants Challenges Basic Ideals

VIENNA — Austria’s young chancellor, Sebastian Kurz, was only 9 when most of Europe dismantled its border checkpoints. Like others of his generation, he took for granted that he could study in other European countries and cross the Continent by rail without his passport.

But now Mr. Kurz, 31, who took office last year as part of a wave of populist leaders propelled to power on anti-migration platforms, is among those forcing the European Union to confront a stark quandary: Can it maintain one of its most cherished principles — open borders among its members — and still provide citizens with a sense of security and identity?

It is the latest in a long series of challenges to strain the bloc. Europe has begun to understand that there is a growing backlash against the very policies, including a unified currency and open borders, that were intended to draw the people of Europe together.

Sitting in his wood-paneled office on Thursday, days after a fight over resurrecting a hard border between Bavaria and Austria that almost brought down the German government, Mr. Kurz said the only hope of preserving borderless, visa-free travel in Europe was to get tough on the Continent’s external frontiers — a step that raises its own practical and moral issues.

But, of course, Kurz’s common sense is not welcome because the long run goal of Respectable People is the non-existence of Europe.

The free movement of people and goods, a principle central to the idea of a confident, unified, liberal new order, is under attack, threatened by a growing public revolt against immigration from the Middle East and Africa.

Which people and which goods?

The European Union was set up as a Union of Europeans. But that kind of continentalism sounds racist, so the EU’s history has been retconned to make inundation by non-Europeans the European Union’s supreme value.

Yet, if you are an American dairy farmer in Wisconsin, are you really entitled to free movement tariff-free of your cheap butter into Europe? Hasn’t the EU instead traditionally existed to protect European farmers? Indeed, the EU imposes an external tariff of just under one Euro per pound of butter.

It’s funny how there is so much less confusion when it comes to goods than to people. It’s almost as if current thinking about people is encumbered by taboos that weren’t not supposed to mention, or even notice.

While the number of migrants has fallen sharply in recent years, public anger has not, and the question remains whether Europe can preserve its borderless domain and, in a sense, its reason for being.

It is vital that Europe accomplish that, Mr. Kurz said in the interview, because free movement across borders “is the basis of the European idea, and we have to do everything to keep it alive.”

The borderless area, known as the Schengen zone, covers 26 countries, 4.3 million square kilometers and about 420 million people and is the most iconic achievement of the European project. The free movement of people has been central to how many Europeans want to see themselves: tolerant, open and diverse.

Mr. Kurz wants to effectively shut down Europe’s southern border, ramping up patrols in the Mediterranean and systematically returning migrant boats to the countries — Libya and Egypt, for example — from where they embarked.

But is this the Europe of its founders, or is it something harsher, less optimistic and self-confident?

See what I said about retconning the past?

The history is actually easier to see with goods. Everybody knows that the EU does not exactly practice free trade with other continents, choosing to put up substantial tariff barriers for its own farmers and the like. But the Establishment’s thinking when it comes to people goes like this: