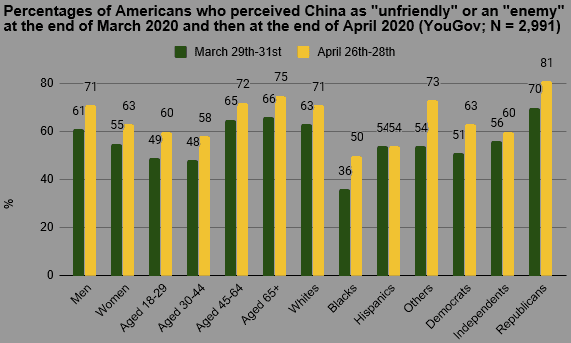 Audacious Epigone: China Slides—Now As Unpopular With Americans As Russia

Four weeks ago, we looked at the change in American sentiment towards China from the beginning of March, before the coronavirus shutdown, and again at the end of March, once shelter-in-place had been instituted nearly nationwide. Of mild surprise was the discovery that Americans expressed less hostility towards China after corona came to the US in a big way than before the virus turned society upside down.

The store of goodwill Americans carried a couple of weeks into the lock down looks to have been exhausted. By the end of April, six weeks into economic catastrophe and official indications–seriously challenged by the Unz Review’s eponym–that the virus originated in a Chinese virology lab rather than in a wet market, sentiments have headed south:

Nearly two-thirds of Democrats now regard China as either “unfriendly” or an “enemy”, up from half of Democrats a month ago. China is now, for the first time since YouGov began this module of questions three years ago, on par with Russia in terms of American resentment.