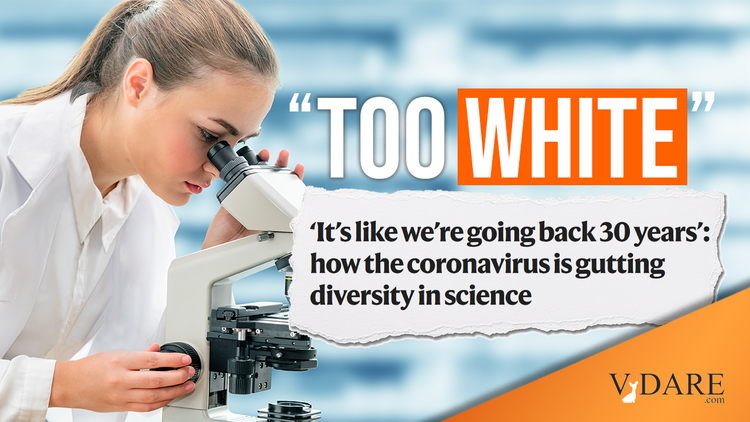 ATLANTIC: Women And BIPOC Scientists Fail To Contribute Their Share During Covid Fight

Earlier: NATURE Magazine: Coronavirus Crisis Will Cause Science to Concentrate on the Competent Rather Than the Diverse, and That's BAD and  (in May) Shouldn't They Just Make the Movie About How Kizzmekia Corbett Will Invent the Vaccine Right Now?

This article was published online on December 14, 2020.

1.
in fall of 2019, exactly zero scientists were studying COVID‑19, because no one knew the disease existed. The coronavirus that causes it, SARS‑CoV‑2, had only recently jumped into humans and had been neither identified nor named. But by the end of March 2020, it had spread to more than 170 countries, sickened more than 750,000 people, and triggered the biggest pivot in the history of modern science. Thousands of researchers dropped whatever intellectual puzzles had previously consumed their curiosity and began working on the pandemic instead. In mere months, science became thoroughly COVID-ized.

As of this writing, the biomedical library PubMed lists more than 74,000 COVID-related scientific papers—more than twice as many as there are about polio, measles, cholera, dengue, or other diseases that have plagued humanity for centuries. …

But the COVID‑19 pivot has also revealed the all-too-human frailties of the scientific enterprise. … Racial and gender inequalities in the scientific field widened. …

Among scientists, as in other fields, women do more child care, domestic work, and teaching than men, and are more often asked for emotional support by their students. These burdens increased as the pandemic took hold, leaving women scientists “less able to commit their time to learning about a new area of study, and less able to start a whole new research project,” says Molly M. King, a sociologist at Santa Clara University. Women’s research hours fell by nine percentage points more than did men’s because of the pressures of COVID‑19. And when COVID‑19 created new opportunities, men grabbed them more quickly. In the spring, the proportion of papers with women as first authors fell almost 44 percent in the preprint repository medRxiv, relative to 2019. And published COVID‑19 papers had 19 percent fewer women as first authors compared with papers from the same journals in the previous year. Men led more than 80 percent of national COVID‑19 task forces in 87 countries. Male scientists were quoted four times as frequently as female scientists in American news stories about the pandemic.

American scientists of color also found it harder to pivot than their white peers, because of unique challenges that sapped their time and energy. Black, Latino, and Indigenous scientists were most likely to have lost loved ones, adding mourning to their list of duties. Many grieved, too, after the killings of Breonna Taylor, George Floyd, Ahmaud Arbery, and others. They often faced questions from relatives who were mistrustful of the medical system, or were experiencing discriminatory care. They were suddenly tasked with helping their predominantly white institutions fight racism. Neil Lewis Jr. at Cornell, who studies racial health disparities, told me that many psychologists had long deemed his work irrelevant. “All of a sudden my inbox is drowning,” he said, while some of his own relatives have become ill and one has died.

Science suffers from the so-called Matthew effect, whereby small successes snowball into ever greater advantages, irrespective of merit. Similarly, early hindrances linger. Young researchers who could not pivot because they were too busy caring or grieving for others might suffer lasting consequences from an unproductive year. COVID‑19 “has really put the clock back in terms of closing the gap for women and underrepresented minorities,” Yale’s Akiko Iwasaki says. “Once we’re over the pandemic, we’ll need to fix it all again.”