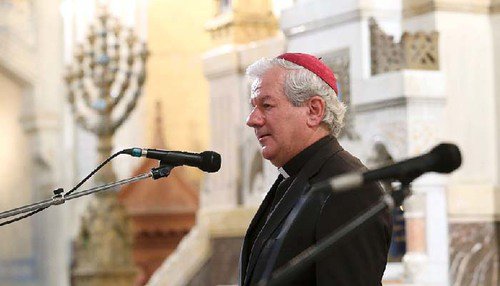 At Least One Catholic Bishop Wiser Than The Pope

H/T the indispensible Refugee Resettlement Watch for the glad tidings that not all Catholic Prelates are as crazily irresponsible as the Pope.

Hungarian Catholic Bishop tells Pope he is wrong, not refugees but invaders! September 12, 2015 links to the feebly-headlined Hungarian bishop says pope is wrong about refugees By Griff Witte The Washington Post September 7 2015 which however did have a vivid quote

“They’re not refugees. This is an invasion,” said Bishop Laszlo Kiss-Rigo, whose dominion stretches across the southern reaches of this predominantly Catholic nation. “They come here with cries of ‘Allahu Akbar.’ They want to take over.”

… The situation, as Kiss-Rigo describes it, is that Europe is being inundated by people who are posing as refugees but actually present a grave threat to the continent’s “Christian, universal values.”

Of course The Washington Post hates this and spends most of the rest of the story trying to ridicule the Bishop. (Note also the lack of capitalization on the headline for ‘Bishop’ and ‘Pope’.)

For new readers who have not been following the ‘Invasion of Europe’ (Invasion archive is here) as we have for several years, you need to know that Pope Francis actually encouraged the migration by lecturing on Lampedusa in 2013 and inviting the illegal aliens to Italy.

US Bishops want 100,000 (mostly Muslim) Syrians admitted to US in the next year!