It’s refreshing to hear a clearly cultural defense of the newly revived nation state from Nigel Farage. It is widely recognized that a smaller, local government tends to be more responsive to citizen needs, and the US system of federalism balancing national and state government power reflects that philosophy. As former Czech President Vaclav Klaus remarked in 2003, “You cannot have democratic accountability in anything bigger than a nation state.”

Nigel Farage was derided by media and liberal elites for demanding that Britain get a divorce from the open-borders European Union, and then he won. 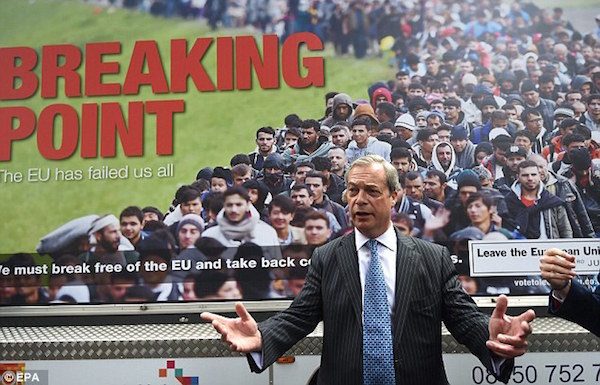 But Farage got down to the social aspect in his recent chat with Tucker Carlson. He emphasized that a nation is not a rough geographical boundary enclosing an economy, as many Democrats believe, but is a community of shared values among culturally similar people who agree to them. That’s the reason why unwise immigration can be so destructive — each aggressively non-assimilated alien, such as Raza types, is a disruptor to the domestic tranquility that comes from a shared culture.

In addition, Farage’s CPAC speech [WATCH] included a shout-out to the Anglosphere, based on the English language, a cultural unifier that is not appreciated enough.

TUCKER CARLSON: You may recognize that man: that was Nigel Farage, who knows quite a bit about running a successful nationalist movement. He once headed the UK Independence Party and was a top backer of the 2016 BREXIT referendum that demanded Britain’s withdrawal from the European Union. Nigel Farage joins us now.

Thanks for coming on. I think it’s fair to say it’s official — nationalism is now global, it’s obvious, there’s no denying it with the president’s speech. Why?

FARAGE: Well you say “nationalism,” I actually call it “nation-ism” — we believe in the nation state. That is the unit we identify with; that is what we feel part of; that is what we cheer for in the Olympics; and if necessary that is what we are prepared to fight for. It embodies our values, our families, our communities, our heritage, our identity, maybe even our tribe. And I think what happened in 2016 with BREXIT and with Trump, but I believe is going to roll out through 2017, is a return to normality.

CARLSON: So the nation state is such an obvious arrangement — it was organic, people created them because they wanted them. I guess the obvious question is why did so many people in power spend so much time trying to obliterate them? What was their motive?

FARAGE: Well one of the motives was France and Germany every 25 years kept fighting each other. So they kind of wondered, they kind of wondered how do we stop the Germans from crossing the Rhine and trying to smash the French, and they thought if they merge the two countries that might be a way to do it, but just as with communism, the big idea that came before this, the road to hell could be paved with good intentions. The mistake they made was this: provided nation-states are democratic, they will not fight and they will not go to war with each other. And if you try and give people a false identity, a false flag, a false god if you like, then they will rebel and turn against it. And I think that what the European Union was, was kind of a prototype for a bigger form of global government, and had Hillary Clinton won, you would have become part of it. So thank goodness that Trump has stopped the rot.

CARLSON: Right, and it would have been an even bigger reaction against it, I predict, in four years. So I think American nationalism is a good thing, a benign thing, I think the same of British nationalism, I think most people would agree deep down. Should we be as excited about the prospect of — I don’t know — German nationalism or Japanese nationalism. Are all nationalisms created equal, and should we like them all?

FARAGE: Well that depends. If those nationalist movements get to a position where they’re able to obliterate the democratic process then we have a problem, but all the while we have genuine democratic government then what we should do is to trust the people. The people in all these countries are not stupid and they will not allow real extremists into power. And the one thing that I find, Tucker, just so offensive is the people like me and Trump who’ve been pushing this idea of the nation state — you make your own laws, you control your own borders and you reach out to your friends —we’ve been called extremists, we’ve been called fascists, we’ve been called all the names under the sun, and actually the real fascists are those that shout us down and say that our view isn’t valid.

CARLSON: So you heard a species of that from Steve Bannon at CPAC yesterday who said this is going be really hard to affect what we want to do because the globalist will be against us. Do you agree with him that the opposition to Trump is rooted in this attachment to globalism, a global government?

FARAGE: What the globalists did, the supra-nationalists did, is they managed to get big business and the big banks on their side. They created a marketplace where the big guys could carve everything up at the expense of the small so you know we’ve got to recognize that there are some very big vested interests but do not want BREXIT to be a success and don’t want Trump to be a success. You know this is not going to be a cakewalk, this is not going to be easy and I think that’s what Steve Bannon was alluding to yesterday, but I tell you what the good news is: the good news is that since BREXIT, there’s now far bigger majority of the British people that support us getting back control of our lives and the same thing is happening here in America. Since November the 8th, what you’ve seen is a man who was elected on a ticket, and he intends to put it into action. That is what democracy is supposed to be; I think Trump is bringing back confidence and faith in the democratic process, and I bet you its popularity ratings are going to soar from here.

CARLSON: So last question: do you think the people around him buy in? I mean you see people like Steve Mnuchin and other Goldman people, have they changed their views completely? Are they on board with this?

FARAGE: The fact that somebody worked at Goldman doesn’t necessarily make them a bad person; it probably means they’re very knowledgeable and very bright and they understand financial markets. I look at that team around Trump, I look at Bannon, I look at Kellyanne Conway. I think we’ve got some very smart people now in charge of the USA, and I’ve got every confidence that Donald Trump’s team are going to bring jobs back to America, they’re going to control illegal immigration and I think a couple years into this administration, this could be one of the most popular presidents of modern times.