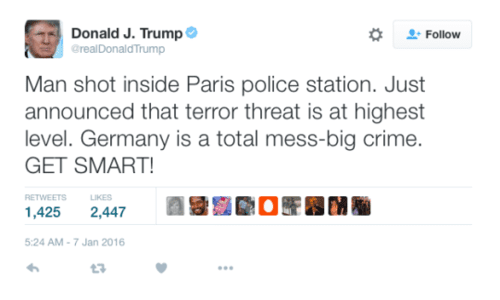 At Boing-Boing, They're Mocking Trump Because THEY Haven't Heard Of The Cologne Attacks

It's the perfectly-optimized Trumpian Twittergaffe, lurking somewhere between a) bloviating ignorance and b) his inability to form coherent thoughts in 140 characters. None of his followers will care, every else will find it amazing.

What that means is that the people at Boing-Boing haven't heard that that there have been multiple sexual attacks by #rapefugees in Germany.

A commenter tries to enlighten them, saying

He's taking about different events that happened recently in France and Germany, but some people manage to oppose sexual assault, violence and xenophobia rather than using one as a tool to support the other.

They include a picture of this: an "anti-fascist" demonstraton with the slogan ""No To Racism! No To Sexism!" Incredibly, these are PRO-immigrant demonstrators on the site of the sex attacks.

And they're wrong—women's rights or Muslim immigration—you can't have both.