A Gallery Featuring Only Artists of Color Feels Like Change

LOS ANGELES — People have come back again and again. They bring family members and friends. It isn’t often that a gallery show engenders such strong responses. But this one feels different, because every face in every painting belongs to a person of color. Every piece of art was created by a person of color. And the exhibition was organized by two young people of color curating their first major show.

“It had the feeling of a warm family gathering on a day in the park,” said Alysia Cortez, describing the first of her three visits to the show, “Shattered Glass,” at Jeffrey Deitch Gallery in Hollywood. “It is magical to see Black and brown people look at the walls and see themselves. I saw a couple show up with their pit bulls, I saw aunties come around to see what’s going on, and I saw so many kids.”

The exhibition, which runs through May 22, was assembled over the last year, when its curators — Melahn Frierson, who joined Deitch in 2018 and became director of the Los Angeles gallery in 2020, and AJ Girard, an arts educator — wanted to find a way to process all that was happening in the country around racial justice and the pandemic.

The use of the word “process” as a verb used to be restricted to the bureaucratic: “Sorry, but we are still processing your paperwork.” Now, it’s used by culturati to depict the profundity of their thinking, especially in conjunction with the preposition “around:” “…wanted to find a way to process all that was happening in the country around racial justice and the pandemic.”

But, it still sounds as boring.

“I felt immortalized,” said Pink Siifu, a hip-hop artist Merriweather depicted in one piece, adding, “you don’t really get to see grills represented in gallery spaces. We’ve been wearing them for generations. It shows the shine; it’s a self-expression.” 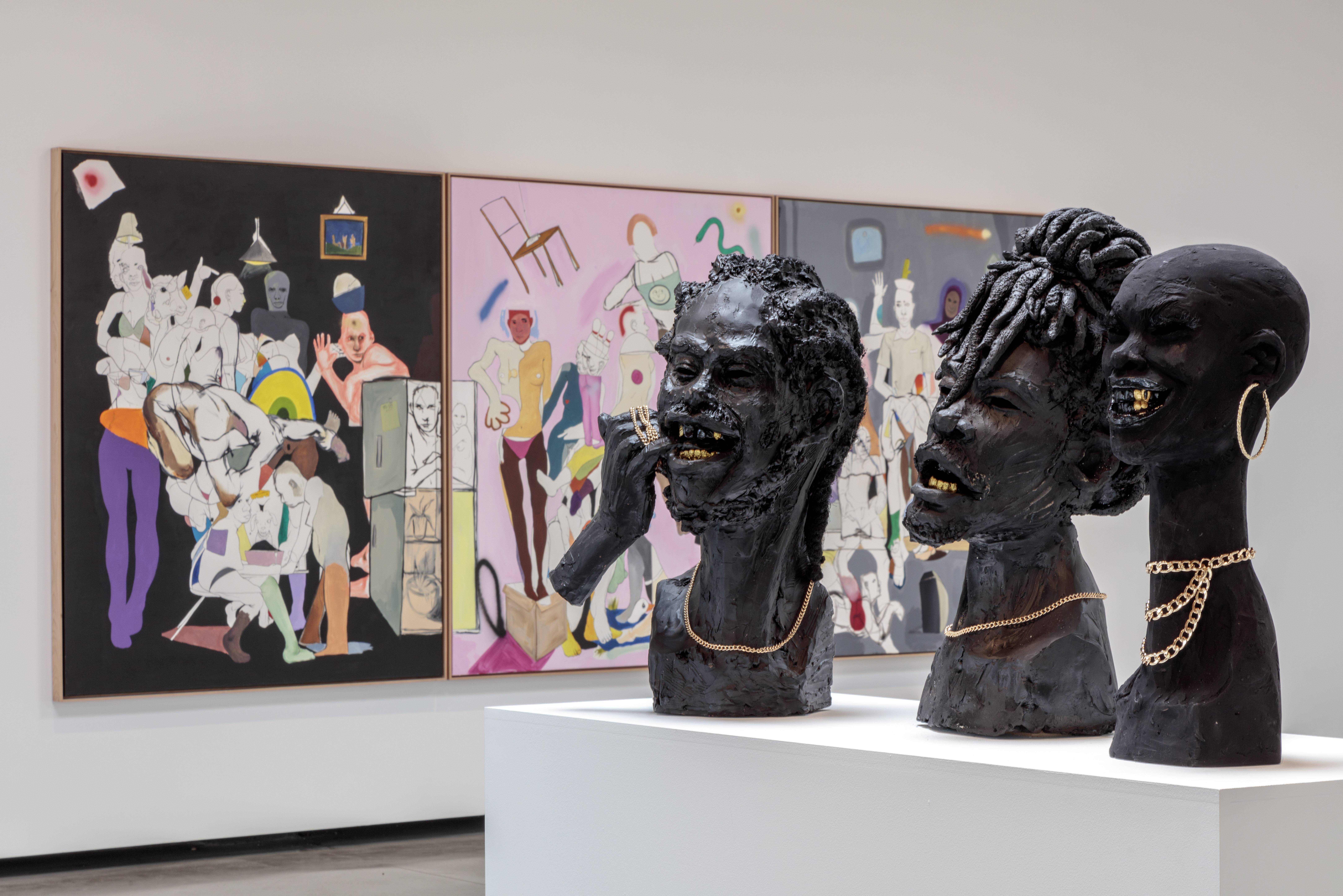 Pink Siifu is the gentleman immortalized on the left.

… “Shattered Glass” celebrates the Black body, with images like Kezia Harrell’s “Bliss: Americana Hot Mamma” depicting a reclined woman comfortable in her own size and nakedness …

… In a way, the curators suggested, the effects of the exhibition are as important as the art that’s in it. “There still exists a massive lack in images of self-affirmation and representation for people of color in traditional figurative portraiture,” the curators wrote in their prepared material for the show. “The result has forced those outside of this one-sided narrative to perceive their history through a predominantly white lens deemed as Universal. It is crucial that our community members, who have historically felt uncomfortable and unwelcome in institutional art settings, finally see themselves represented in these spaces and beyond.”

… Since society has for so long failed to question shows featuring only white artists, the exhibition seems to ask, why not similarly get used to shows with only artists of color? “It’s OK for our perspective to be dominant,” Girard said. “It’s like we dropped our anchors.”

An anonymous commenter speculates on the tax implications of the 2021 push to hype Really Ugly Black Statues:

There’s got to be better black art than the crap in the photos in the New York Times article (keep scrolling down, there are photos all through the article).

Maybe this exhibition had a sort of ghetto smell to it and no talented artists wanted to participate. And the good ones would be in New York, not Los Angeles, anyway.

Are we hearing about the “art pricing gap” yet? We must do something about black art not being bought for high-enough prices! Rich people, get to work on that. Buy some of this crap at high prices and then send it out on “permanent loan” to the Victorville Museum of Modern Art and take a tax deduction.

I can see some fun developing in the art world where buyers overpay for black art for affirmative action reasons, and then they donate the art, and the recipient institutions call in appraisers, who at first say it’s worth nothing, and the appraisers are #cancelled on Twitter and lose all business because of that, so the art appraisal industry undergoes a sudden wokening and comes up with equitable holistic standards for appraisal (value = actual value x 100 if black artist), resulting in huge valuations for black art despite no actual market for the crap. Ultimately there will be a giant bubble. What will the IRS do? Pop it, or go along?