Invasive Mexicans, the type that believes the American southwest belongs to them, have been expanding their propaganda efforts in the last few years. Chicano studies in the universities have been popular, with dozens of universities offering degrees in the subject. Naturally those graduates then become the leadership cadre for leading the raza assault against America.

Even top universities, like Stanford, offer degrees in chicano studies. Stanford further provides a chicano residence hall, Casa Zapata, so the young revolutionaries can communicate in comfort about their oppression. The dorm includes a mural in which Che replaces Jesus in a raza-themed diverse Last Supper (below). 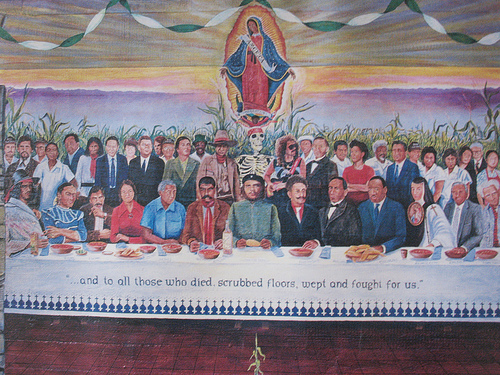 Anyway, not every young chicano can get an expensive degree in ethnic marxism charged to the taxpayers as happens in state universities, so the indoctrination activists have moved into the high schools. This scenario has played out very publicly in Arizona, which had a particularly virulent form of Mexican studies — so much so that in 2010 state voters approved an initiative to end seditious ethnic programs. (See Raza Racists Angered at Arizona’s Ethnic Studies Prohibitions.)

Below, Tucson High raza students wore their Che-inspired revolutionary berets to protest the cut of their anti-American class. 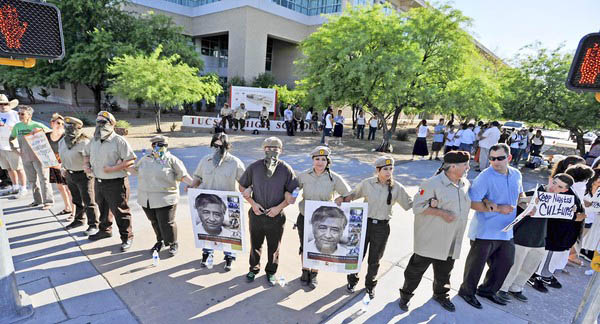 A recent report from Tucson shows the raza bunch are as revolting as ever.

A new Arizona law aims to ban ethnic studies classes deemed to be divisive, and the state’s schools superintendent says Tucson’s program is in violation. Teachers and students are fighting back.

Reporting from Tucson — Arizona’s public schools chief had heard unsettling reports about what was being taught in the Tucson Unified School District’s Mexican American studies program and decided to see for himself.

As he sat in on a Chicano literature class, Supt. John Huppenthal noticed an image of Che Guevera hanging on a wall and listened to a lecturer cast Benjamin Franklin as a racist.

And though teacher Curtis Acosta did not directly portray Mexican Americans as an oppressed minority, he discussed educational theorist Paulo Freire and his “Pedagogy of the Oppressed,” which the Tucson High Magnet School students used as a textbook. To Huppenthal, the message was clear and disturbing.

“These kids got it,” he said. “They understood the framework that was being laid out — that Hispanics are the oppressed and Caucasians are the oppressors. That’s very troubling.”

A state law adopted this year aims to outlaw divisive ethnic studies, and Huppenthal will soon decide whether the Tucson district’s program violates the law and should be eliminated. In a state known for cultural clashes, the debate over the future of Mexican American studies in Tucson is particularly charged, prompting raucous protests and a host of accusations — of brainwashing, of sloppy academics, of racism.

Its critics — led by Huppenthal, a veteran state senator elected superintendent of public instruction last year — say that framing historical events in racial terms “to create a sense of solidarity” promotes groupthink and victimhood. “It has a very toxic effect, and we think it’s just not tolerable in an educational setting,” Huppenthal said.

For many Latinos, the controversy is not only about the program. It’s about identity — and the feeling that Arizona is trying to rein in the burgeoning social and political influence of Latinos in the state. Last year the state passed the controversial illegal immigration law SB 1070, which includes a provision that requires police to determine the immigration status of people they lawfully stop and whom they suspect to be in the country illegally. That portion of the law has been temporarily blocked by a federal judge.

For nearly a decade, teachers could be removed from the classroom if their English was too heavily accented — a practice Huppenthal ended this year after federal authorities launched a civil rights investigation.

“The academic success of our students is a threat, a danger to the status quo,” said Lorenzo Lopez, a Mexican American studies teacher at Cholla High Magnet School in Tucson. “There is empirical data that shows the academic success — the matriculation onto higher education, higher standardized test scores, higher graduation rates. Those successes are why we’re being singled out.”

Huppenthal deemed the Tucson program in violation of the law in June. The school district appealed the ruling, and testimony before an administrative law judge overseeing the appeal concluded last month. The judge will make a recommendation on the legality of the program, but Huppenthal still has the final say, which means the chief impact of the recommendation may be in setting the stage for later legal action.

In a separate case, 11 teachers and two students from the school district have sued, contending that the law is unconstitutional. Last week they asked for an injunction to halt the law’s implementation.

The push against Mexican American studies in Tucson can be traced to 2006, when activist Dolores Huerta told students at Tucson High Magnet School that “Republicans hate Latinos.” Tom Horne, then the state’s schools superintendent, sought to counter the message by sending his deputy, Margaret Garcia Dugan, a Latina Republican, to address the students.

When she began speaking, some students stood, turned their backs and lifted clenched fists in the air. Some covered their mouths with tape. Some walked out.
Horne responded with an open letter to the citizens of Tucson: “I believe the students did not learn this rudeness at home, but from their Raza teachers.”

Horne, who is now attorney general, helped craft the law targeting the program. It does not ban all forms of ethnically based courses in Arizona public schools. The law was designed, in effect, to target what critics say are hallmarks of Mexican American studies classes offered to junior and high school students in the Tucson district.

Among other things, the law bans classes primarily designed for a particular ethnic group or that “promote resentment toward a race or class of people.” Defenders of the courses say they do no such thing.

Not long after Huppenthal took office in January, he commissioned a $110,000 audit of the program. To the surprise and relief of the program’s defenders, the audit concluded that the program complied with the law and that “students are taught to be accepting of multiple ethnicities of people.”

Huppenthal rejected the audit. “When you’re being watched, you don’t do the things that are inappropriate,” he said.

This summer, Huppenthal drew fire after suggesting similarities between the program and the Hitler Youth. Huppenthal said the remarks were made on “an academic basis” and misunderstood.

He no longer draws the comparison, he said, because it is too inflammatory. But in an interview, he said, “The thing that Hitler did was he used perceptions of historical injustice, he cast them in racial terms, and then he also referred to the Sudetenland as a stolen land — that’s the parallel.”

Lopez, the Cholla High teacher, counters that the material is designed to reach underperforming and marginalized students. “It’s not un-American to expose narratives that aren’t necessarily covered in traditional history texts,” he said.

Supporters like to note that since the program’s inception, 89% of its students have graduated high school — and that some non-Latinos enroll in the classes.

The passions surrounding the program were on display last month when Huppenthal traveled to Tucson to attend the screening of a documentary on a Phoenix school. He agreed to participate in a panel to discuss the movie, but Mexican American studies came up.

“Stop demonizing the teachers, demonizing the courses that teach kids to aspire to higher things, to do good in their lives,” said Salomon R. Baldenegro, a former assistant dean at the University of Arizona.

Many in the crowd stood and offered applause, which slowly evolved into a rhythmic united clap.

Huppenthal replied that curriculum must reach a standard that all Arizonans can be proud of. “I’d ask those people who have challenged me, have they really met that standard over the last couple years?”

As he left the theater, Huppenthal continued talking with program supporters, teachers and parents as they followed him to the parking lot. “If the court finds nothing wrong, are you still going to ban ethnic studies?” one asked him.

Lopez stepped up with his daughter at his side. “I’m one of the teachers that you have vilified. My daughter, she hopes to take these classes,” he told Huppenthal. “Your action will deny her the opportunity to learn of her culture, of her past within the school system.”

“We certainly hope not,” Huppenthal said. Then he walked off, got in the passenger side of a car and rode away.