Polls over the last little while have been unanimous that American’s are supportive of Arizona’s attempt to bring immigration anarchy under control. It’s a testament to the common sense of the American people that the media’s barrage of outright lies about the Arizona law has not dissuaded the majority of citizens that immigration anarchy must stop. The law is also strictly enforcement, with no morally repugnant amnesty.

Mainstream surveys from CBS/New York Times, Investor’s Business Daily and Rasmussen have all shown the public to be positive toward Arizona’s crackdown.

Broad Approval For New Arizona Immigration Law, Pew Research Center for the People and the Press, May 12, 2010

The public broadly supports a new Arizona law aimed at dealing with illegal immigration and the law’s provisions giving police increased powers to stop and detain people who are suspected of being in the country illegally.

After being asked about the law’s provisions, 59% say that, considering everything, they approve of Arizona’s new illegal immigration law while 32% disapprove.

The latest national survey by the Pew Research Center for the People & the Press, conducted May 6-9 among 994 adults, finds that Democrats are evenly split over Arizona’s new immigration law: 45% approve of the law and 46% disapprove. However, majorities of Democrats approve of two of the law’s principal provisions: requiring people to produce documents verifying legal status (65%) and allowing police to detain anyone unable to verify their legal status (55%).

Republicans overwhelmingly approve of the law and three provisions tested. Similarly, among independents there is little difference in opinions of the new Arizona law (64% approve) and its elements, which are viewed positively.

And that’s not all. The Wall Street Journal’s new poll headlined party politics, but drilling down into the paragraphs revealed still more agreement with Arizona, except for a certain ethnic group. The WSJ survey broke out the opinion of hispanics, who are not friendly to American sovereignty. (Poll data here.)

The poll also showed sharp divisions among voters on the subject of illegal immigration.

Among all adults, support is high for the new Arizona law that makes it a state crime to be in the country illegally and requires law enforcement officers to question people if they have reasonable suspicions about their immigration status. 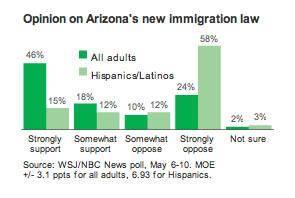 Divisions were even sharper between whites and Hispanics. Among Hispanic respondents, 70% opposed the law, while 69% of whites in the survey supported it.

Hispanics also held a different view of immigration generally than did white respondents.

The survey found that, at the moment, Hispanics greatly favored Democrats over Republicans, particularly among Hispanics under age 40.

That stands as a danger sign for the GOP given the rapid growth of that voter bloc.

How typically self-serving that illegal aliens and their pals think they are improving America by their uninvited presence. Someone should tell them them lowering the average educational level and creating a permanent underclass are not usually considered to be advantageous.