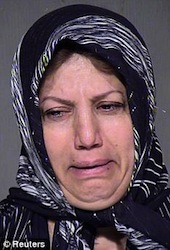 In Phoenix, police are going after an Iraqi immigrant family which has behaved violently toward their disobedient 19-year-old. Yusra Farhan (pictured) recently beat her daughter Ayia so severely that she wound up in the hospital because the girl had spoken to a boy at school.

One can assume Phoenix law enforcement is paying close attention to this case in order to prevent another Arizona honor killing like the 2009 murder of Noor Almaleki by her father for living an un-Islamic lifestyle.

Predictably, the family used the shopworn cultural defense, that daughters who are insufficiently submissive can be smacked around or even killed in dear Iraq with no legal consequences. Therefore, as arrogant Muslims, they assert their right to live according to sharia law in America.

The video below is fascinating in how the beastly younger girls are trained to be willing Muslim enforcers, and even the abused daughter defends her backward parents and their retro values.

The gruesome mom and kiddies would make a great twisted sitcom, that might be called Sharia Family Circus or perhaps Little Mosque in the Desert.

(Just kidding — Muslim immigrants with their misogynous diversity are not amusing at all.)

PHOENIX – An Iraqi family living in the valley claim it is part of their culture, but police say it’s a crime.

Police have re-arrested Yusra Farhan, an Iraqi woman taken into custody last week. Farhan was accused of beating her 19-year-old daughter for talking to a boy, but detectives have found that wasn’t the first time.

Back in November, Farhan allegedly burned the victim’s face and chest with a hot spoon, because she did not agree to an arranged marriage with a 38-year-old man.

Yusra Farhan is facing a new charge of aggravated assault.