From Arguably Wrong, with the “basic reproduction number” or R 0 on the horizontal axis and the total number of American deaths on the vertical (logarithmic) axis. 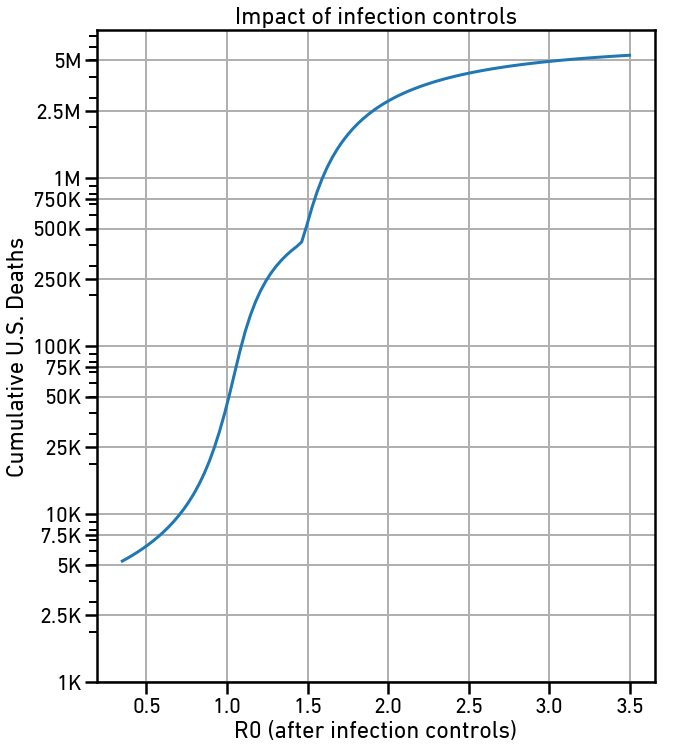 A basic SIR model for the epidemic.

Total population 327 million, with a single initiating infection. 12 day course of disease, initial R0 of 3.5 (as per the stats from China that Steve linked.) Assume 5% of cases are critical, 2% of those critical cases die with ICU care, 5% with general hospital care, and 50% with no care. 90,000 available ICU beds and 900,000 available hospital beds.

Run this model through to completion and it sweeps through the population in about a year, infecting most everyone (less about 9 million who escape), killing 5.4 million.

Now, suppose we impose infection controls on day 80, right about when there’s 1000 deaths from this thing. And then we vary how strong those controls are: from 0.35 (what the Chinese managed) up to nothing at all.

Here we see how the # of deaths varies with the strength of our controls. If we impose Chinese-style controls, we get away with only 5K deaths, or 1000-fold fewer than without the controls. But the inflection point isn’t just at 1.0. In particular if we can get the R0 below about 1.5 that gets us down under 500K, or a 10-fold reduction. At 1.0 we get down to about 50K. …

He added on Greg Cochran’s blog:

You can see what’s happening if you look at the second plot. The vertical line is when we impose controls, the horizontal lines are ICU bed capacity and total hospital bed capacity. Right below an R0 of 1.5, we dip the # of critical cases low enough that we never exceed hospital capacity. The trick here though is that until you get R0 below 1.0 you’re still sweeping through most of the population, just more slowly, slowly enough that the hospitals can handle it. And that means that, for example, if you get R0 to exactly 1.0 you have to keep those infection controls in place for ~5 years or else you’ll be back up close to 5million dead again.

But yeah, there are benefits to lowering R0 even if you don’t manage to get it below 1. …

The other thing to keep in mind is that different countries are taking different strategies, one way or another. If you just give up and let the epidemic roll through, you’re losing a ton of people, but the epidemic’s over in a year or so, when there’s too few susceptible people to sustain it anymore. If you do real solid infection control the way the Chinese have done (and Singapore, Taiwan, and Hong Kong), you stomp it hard enough that you’re done in a year or so as well, with most of that time in the contact tracing regime where you’re stomping individual small outbreaks.

If you take the plan of stretching it out as long as possible, you’re looking at ~5 years of time to let it sweep through the whole population. And if, say, China has successfully eradicated the virus in year 1, they are going to be pissed as hell if you reintroduce it back into their population in year 2. Plus 5 years of massive economic disruption is a lot worse than a couple of months followed by a year of outbreak containment.

A commenter on Greg Cochran’s blog challenged him:

Redo your numbers with a more reasonable R0 of 2.0.

With no control measures, it sweeps through more slowly, with less load on the hospital system, so the total deaths drops to 2.8 million, but it takes 608 days instead of about a year.

Control measures again get implemented when we hit 1000 deaths, but that’s now on day 174 instead of 80, again because of the slower spread. Getting down to an R0 of ~1.5 again drops us down low enough to avoid overloading the hospital system, dropping deaths down to ~400K. Getting all the way down to R0=1 drops us to 25K, and the further benefit is roughly logarithmic in the regime around R0=1, down to 2.5k dead at R0=0.35. Marginal benefit in terms of reduced deaths of additional reduction in spread is highest right above R0=1.5, and then right above 1.0.

Total length of the epidemic spikes right around R0=1.0, and gets shorter drastically as the R0 comes down below that.

Now, if your polity is wise and imposes controls when there’s fewer deaths, on day 130, when you’ve only got 30 deaths (i.e., nowish), you get better results, but only if you can contain the spread. Keeping it above 1.0 doesn’t benefit much, but 0.35 gets you down to ~80 total deaths, and 0.75 to ~150. Even just under 1.0 keeps you under 2.5K deaths. Sooner is better, especially if you can actually control the disease.