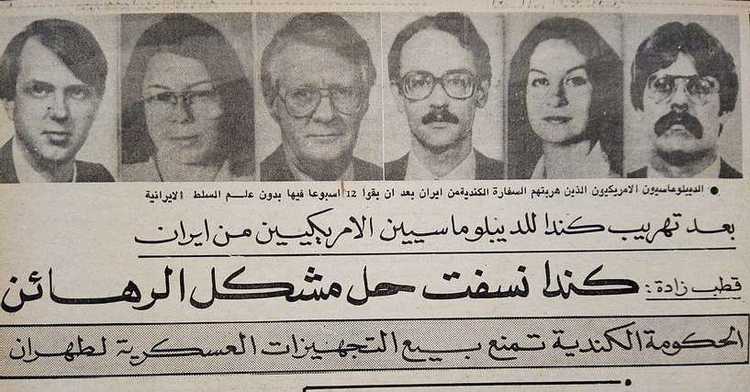 "Argo" And The Canadian Caper

Ben Affleck has made himself into a brand name over the last half decade for directing well-made suspense movies for intelligent grown-ups: Gone Baby Gone, The Town, and now Argo. They're not quite Drop Everything and Hire a Sitter movies, but more like When You Get a Chance, You and Your Spouse Will Enjoy This Movie movies. Thus, Argo didn't have a huge opening weekend, but it had an excellent second weekend, down only 15%, indicating fine word of mouth.

Argo is based on the once well-known 1980 "Canadian Caper" in which Canadian diplomats in Iran sheltered and help to extricate six American diplomats who had avoided being rounded up with the rest of the embassy hostages. The CIA side of the extrication was kept secret until 1997, and the movie focuses on the American machinations, somewhat unfairly to the Canadians.

And, most of the last half hour of exciting plot twists didn't actually occur, but they were all plausible enough that they well could have happened.

Also, unsurprisingly, Affleck strives to make the Democratic Administration of the time look as good as possible.

It's interesting to speculate how good Affleck-directed movies would be if he didn't make movies in order to cast himself or his brother Casey as the lead. For example, Affleck has himself play Tony Mendez, who was a CIA expert on disguises and forgery. Mendez called up an old friend, the Hollywood makeup artist who won an Oscar for Planet of the Apes, and they cooked up a fake sci-fi movie production to get Mendez into Iran as a Canadian movie producer scouting for exotic locations.

Mendez entitled his memoirs Master of Disguise. Affleck is, by the standards of well-known actors, not very good at blending in. He's tall and he had a lot of work done to look like a TV movie of the week version of a Hollywood leading man the way Mitt Romney looks like somebody you'd cast to play the Republican candidate in a movie about the Secret Service trying to stop terrorists from blowing up a Presidential debate.

So, in Argo, Affleck dyes his hair black and grows a huge beard to cover most of his square-jawed, symmetrical face.

Apparently, the real Mendez has outstanding conman skills (he's an expert forger as well as make-up artist), which ought to make him an interesting character. But Affleck's chief trait as an actor is earnestness, so nothing much gets developed along those lines.

One amusing bit of history that was distorted in order to build tension was the secret six's reaction to Mendez arriving with elaborate cover stories about how each was a movie person scouting locations. In Argo, Affleck has to win them over to trust his crazy scheme enough to risk their lives on it. Tense arguments ensue.

In reality, the six thought it was the most fun idea they'd ever heard. Without prompting from Mendez, they immediately started scrounging up more fashionable clothes and blowdrying their hair to look more Hollywood. When he returned the next day, they excitedly showed off their new looks.

A lot of crime and suspense movies these days are elaborate metaphors for movie-making: e.g., Inception, or The Town's ultra-competent bankrobbers are really a movie technical crew. (Real criminals tend to be screw-ups.) The Canadian Caper was an instance of this movie trope slopping over into real life, and, if anything, Argo underplays this.