Are Feminists Stuck in "Groundhog Day" or "Memento?"

How Boys Teach Each Other 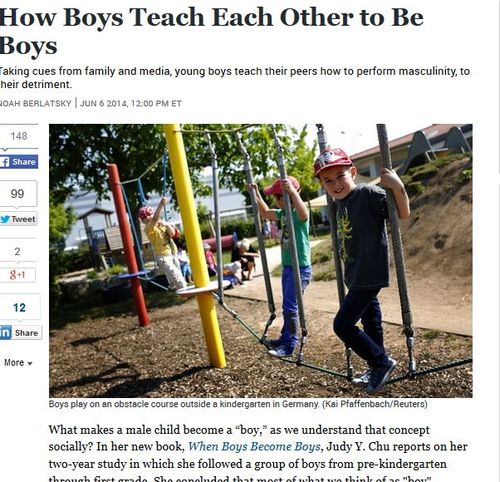 Taking cues from family and media, young boys teach their peers how to perform masculinity, to their detriment.

What makes a male child become a “boy,” as we understand that concept socially? In her new book, When Boys Become Boys, Judy Y. Chu reports on her two-year study in which she followed a group of boys from pre-kindergarten through first grade. She concluded that most of what we think of as “boy” behavior isn’t natural or authentic to boys, but is something they learn to perform. Boys aren’t stoic or aggressive or hierarchical; they aren’t bad at forming relationships or unable to express themselves. They pick up all these traditional traits of masculinity by adapting to a culture that expects and demands that they do so.

In the Internet era, famous old magazine brands like The Atlantic are mostly churned out out by trustfund kids who can’t remember the 1970s, so most of today’s feminist articles are near clones of the feminist articles I read in Ms. Magazine in 1973.

But when I read them over 40 years ago, they were at least fairly novel. And a massive social experiment was then going on in which true-believing young parents were trying to impose feminist theories of childrearing on their newborns.

The results of this massive 1970s experiment came in long, long ago: Gender-neutral childrearing turned out to be highly ineffectual because it was immensely unpopular with its subjects. Little boys and little girls whined and nagged and threw temper tantrums until their feminist parents broke down and gave them the incredibly sexist toys they insisted upon.

In fact, the opposite happened of what feminists predicted in 1969. As society got richer and more choices became available, little kids’ toy and media choices diverged even more along lines of sex. Instead of boys and girls both getting oranges for Christmas and being thankful they weren’t lumps of coal, little girls demanded Polly Pocket Fairy Wishing Worlds and boys insisted upon massive fantasy weapons.

But, feminist theory never learns from its failures.

As Talleyrand said about the Bourbon dynasty restored in France in 1815, the same is true about today’s feminists: “they had learned nothing and forgotten nothing.”