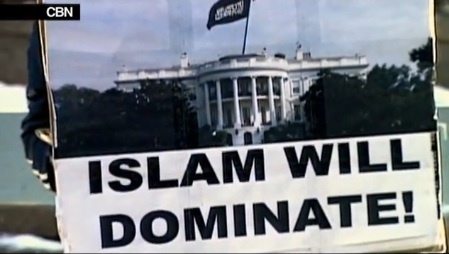 Anti-Jihad Documentary Is Shown to NYPD, which Alarms NYTimes

The New York Times is shocked and appalled that around 1500 of the city’s police have been shown “The Third Jihad,” a documentary produced by Zuhdi Jasser about the threat posed by the murderous ideology of Islam.

More generally, the Times is unhappy with the NYPD for its surveillance activities in mosques and Muslim neighborhoods required to keep the city safe from men who desire to mass murder infidels. Naturally the fifth column bunch at the Council of American Islamic Relations and elsewhere are actively working against homeland security in this country, and the liberal media is standing on their side rather than the safety of Americans.

The film shows hostile Muslims declaring their intention of conquering the entire world and controlling it according to the authoritarian sharia law of Islam. Every American should know Islam’s to-do list, and police officers even more so.

Below, a screen snap from the documentary. 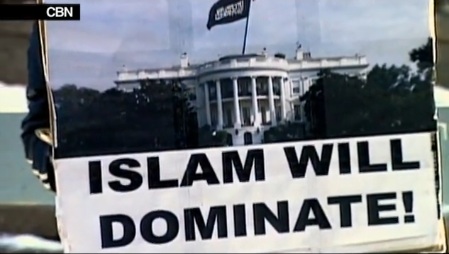 Here is the beginning of the film. You can watch the whole documentary on the website The Third Jihad.

The Times complains that the film is “Dark” but the atmospherics are determined by the subject. Just because not every Muslim is a throat-slitting jihadist, the Times believes we should not discuss the millions worldwide who are.

Of course, diverse immigration that increasingly admits Muslims by the thousands every year has brought the threat into our own country. The press does not want to connect those dots at all.

“This is the true agenda of much of Islam in America,” a narrator intones. “A strategy to infiltrate and dominate America. … This is the war you don’t know about.”

This is the feature-length film titled “The Third Jihad,” paid for by a nonprofit group, which was shown to more than a thousand officers as part of training in the New York Police Department.

In January 2011, when news broke that the department had used the film in training, a top police official denied it, then said it had been mistakenly screened “a couple of times” for a few officers.

A year later, police documents obtained under the state’s Freedom of Information Law reveal a different reality: “The Third Jihad,” which includes an interview with Commissioner Raymond W. Kelly, was shown, according to internal police reports, “on a continuous loop” for between three months and one year of training.

During that time, at least 1,489 police officers, from lieutenants to detectives to patrol officers, saw the film.

News that police trainers showed this film so extensively comes as the department wrestles with its relationship with the city’s large Muslim community. The Police Department offers no apology for aggressively spying on Muslim groups and says it has ferreted out terror plots.

But members of the City Council, civil rights advocates and Muslim leaders say the department, in its zeal, has trampled on civil rights, blurred lines between foreign and domestic spying and sown fear among Muslims.

“The department’s response was to deny it and to fight our request for information,” said Faiza Patel, a director at the Brennan Center for Justice at New York University Law School, which obtained the release of the documents through a Freedom of Information request. “The police have shown an explosive documentary to its officers and simply stonewalled us.”

Tom Robbins, a former columnist with The Village Voice, first revealed that the police had screened the film. The Brennan Center then filed its request.

The 72-minute film was financed by the Clarion Fund, a nonprofit group whose board includes a former Central Intelligence Agency official and a deputy defense secretary for President Ronald Reagan. Its previous documentary attacking Muslims’ “war on the West” attracted support from the casino magnate Sheldon Adelson, a major supporter of Israel who has helped reshape the Republican presidential primary by pouring millions of dollars into a so-called super PAC that backs Newt Gingrich.

Commissioner Kelly is listed on the “Third Jihad” Web site as a “featured interviewee.” Paul J. Browne, the Police Department’s chief spokesman, wrote in an e-mail that filmmakers had lifted the clip from an old interview. The commissioner, Mr. Browne said, has not asked the filmmakers to remove him from its Web site, or to clarify that he had not cooperated with them.

None of the documents turned over to the Brennan Center make clear which police officials approved the showing of this film during training. Department lawyers blacked out large swaths of these internal memorandums.

Repeated calls over the past several days to the Clarion Fund, which is based in New York, were not answered. The nonprofit group shares officials with Aish HaTorah, an Israeli organization that opposes any territorial concessions on the West Bank. The producer of “The Third Jihad,” Raphael Shore, also works with Aish HaTorah.

Clarion’s financing is a puzzle. Its federal income tax forms show contributions, grants and revenues typically hover around $1 million annually — except in 2008, when it booked contributions of $18.3 million. That same year, Clarion produced “Obsession: Radical Islam’s War Against the West.” The Clarion Fund used its surge in contributions to pay to distribute tens of millions of copies of this DVD in swing electoral states across the country in September 2008.

“The Third Jihad” is quite similar, in style and content, to that earlier film. Narrated by Zuhdi Jasser, a Muslim doctor and former American military officer in Arizona, “The Third Jihad” casts a broad shadow over American Muslims. Few Muslim leaders, it states, can be trusted.

“Americans are being told that many of the mainstream Muslim groups are also moderate,” Mr. Jasser states. “When in fact if you look a little closer, you’ll see a very different reality. One of their primary tactics is deception.”

The film posits that there were three jihads: One at the time of Muhammad, a second in the Middle Ages and a third that is under way covertly throughout the West today.

How the film came to be used in police training, and even for how long, was not clear. An undated memorandum from the department’s commanding officer for specialized training noted that an employee of the federal Department of Homeland Security handed the DVD to the New York police in January 2010. Since then, this officer said, the video was shown continuously “during the sign-in, medical and administrative orientation process.” A Department of Homeland Security spokesman said it was never used in its curriculum, and might have come from a contractor.

As it turned out, it was police officers who blew the whistle after watching the film. Late in 2010, Mr. Robbins contacted an officer who spoke of his unease with the film; another officer, said Zead Ramadan, the New York president of the Council on American-Islamic Relations, talked of seeing it during a training session the previous summer. “The officer was completely offended by it as a Muslim,” Mr. Ramadan said. “It defiled our faith and misrepresented everything we stood for.”

When the news broke about the movie last year, Mr. Browne called it a “wacky film” that had been shown “only a couple of times when officers were filling out paperwork before the actual course work began.”

He made no more public comments. Privately, two days later, he asked the Police Academy to determine whether a terrorism awareness training program had used the video, according to the documents.

The academy’s commander reported back on March 23, 2011, that the film had been viewed by 68 lieutenants, 159 sergeants, 31 detectives and 1,231 patrol officers. The department never made those findings public.

And just one week later, the Brennan Center officially requested the same information, starting what turned out to be a nine-month legal battle to obtain it.

“It suggests a broader problem that they refuse to divulge this information much less to discuss it,” Ms. Patel of the Brennan Center said. “The training of the world’s largest city police force is an important question.”

Mr. Browne said he had been unaware of the higher viewership of the film until asked about it by The New York Times last week.

There is the question of the officers who viewed the movie during training. Mr. Browne said the Police Department had no plans to correct any false impressions the movie might have left behind.

“There’s no plan to contact officers who saw it,” he said, or to “add other programming as a result.”