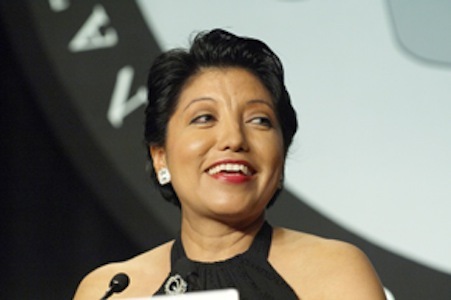 Anti-Anglo Hispanic Journalist Of The Year

When I read about this story, about a man who had had to defend himself against attackers twice in a short period of time being stalked by Rebecca Aguilar, now suspended from her job at KDFW, I noted that she was Hispanic Journalist of the Year.

Are you a trigger-happy kind of person?'

Anyone who doubts journalists' decency and good sense need only to have seen Fox 4's Rebecca Aguilar in action this week to have their worst impressions confirmed. Ms. Aguilar confronted 70-year-old James Walton, who the day before had killed a burglar at his West Dallas machine and welding shop, his second such shooting in three weeks. He was trying to leave a sporting goods store, where he had just bought a new shotgun to replace the one police took. He clearly didn't want to talk, so Ms. Aguilar berated him with loaded questions: "Are those tears of, what, remorse? ... Are you a trigger-happy kind of person? ... Is that what you wanted to do, shoot to kill?" Although Channel 4 pulled the video from its Web site, you still may find a copy floating around the Internet. Search for "reporter ambushes senior citizen."

KDFW has been trying to suppress the video, citing specious copyright claims. They're wrong—they aren't covering the news here, they are the news, and this now First Amendment territory, but anyhow it's back up online, for now. Watch it, and remember that he's not a criminal, or a suspect, but a victim, and the home invaders were breaking into his home as well as his business, and decide for yourself what kind of "Journalist of the Year" Ms. Aguilar is.