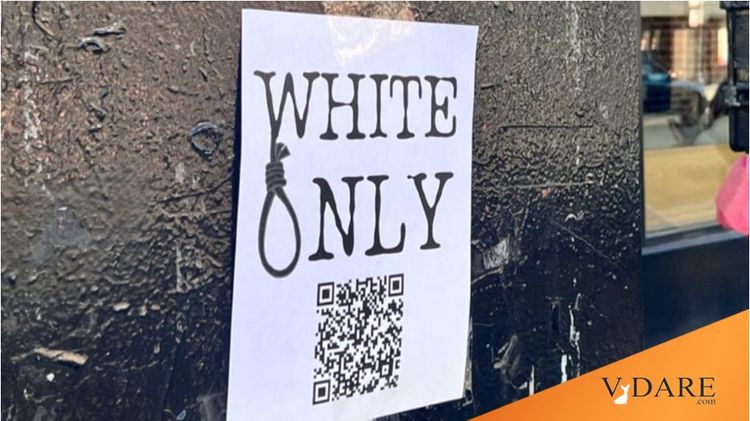 Another Noose Hoax: Black Artist Posts "White Only" Flyers In Chicago With Noose To Try And Create Anti-White Hatred

Can one of these noose scams be real? Please? And not created by black people to demonize white people collectively?

Flyers With A Noose That Say ‘White Only’ Alarmed Chicagoans On Social Media. The Black Artist Behind Them Said She Has No Regrets: The Black artist behind the unconventional marketing campaign said there’s a reason for provocative imagery., Block Club Chicago, November 3, 2022

HYDE PARK — A Black artist posted flyers that said “white only” and depicted a noose, saying they were part of a political act and marketing campaign for her new exhibition.

Images of the flyers, which have popped up in Boystown and Hyde Park in recent days, went viral online, with some speculating a hate group was to blame and others saying the image angered and upset them. Hyero, the artist behind the flyers, said she makes no apologies for her provocative marketing methods.

Hyero, 23, of the western suburbs, said the flyers are part of marketing for “YTs Only,” an art show at OMWP Studios, 2113 W. Armitage Ave. The show opens 7 p.m. Friday and runs throughout the weekend.

“I really felt like a message really needed to be sent to white communities that Black people can’t just exist for the sake of not being political,” said the artist, who declined to provide her name. “Being a Black woman and knowing I’m going to be political by default, I decided to use my platform to try to educate and show the white experience through my African-American eyes.”

Hyero said she understands the flyers could be traumatic for some people, but she sees the noose as a symbol of her disempowerment. The American flag is triggering to her, but it still flies, she said.

Hyero has received strange looks while putting up the flyers, and one Black woman ripped it down — but then wound up helping her after the artist explained her project, she said.

The flyers have confused and alarmed others, though.

As images of the flyers spread on social media, some wondered if a QR code on them was part of a trick to collect people’s private information. Others said they were worried hate groups are getting too close to home.

Some Hyde Park residents were bewildered. Among them was writer Mikki Kendall, who, upon learning the true purpose of the flyer, condemned the artist.

“Publicity stunts like this hinge on a narrative that the feelings, concerns and fears of Black Chicagoans don’t matter, that we’re somehow supposed to be tough enough not only to ignore our own history but provide cover for people who are too cowardly to return to the towns they are from and confront the people who hurt them on their home turf,” Kendall said.

Hyero said she simply wants people to focus on her artwork, which she said “highlights the strong part of the Black experience,” something she’s endeavored to do since high school.

The artist grew up in a racist environment in Abington, Pennsylvania, where her high school’s mascot was the “Galloping Ghost,” she wrote on Eventbrite. Many, including the artist, have identified the “ghost” as a klansman. She’s had to defend her art against critics who questioned why she drew Black people, she wrote on Eventbrite.

“I feel like the story of the suburban Black girl who feels out of place, who feels like a character, is never seen or heard, and she needs her own show,” Hyero said.

But this show isn’t for Abington, Hyero wrote on Eventbrite.

“It’s an homage to the Black experience in predominantly White communities. Making this show, I had to go back and educate myself, be concise, make sure I’m telling the story that needs to be told and that no one else is telling it,” Hyero said.

Hyero hopes the people who come to the show feel seen and they are able to look at things from a different perspective. She said most of her work is just “Black people existing,”

“I want non-Black people to see our pain, not in the way of police brutality or what is portrayed on TV. I want us to actually see and feel our pain. That’s why I put up the flyer. My message really needs to get out,” Hyero said.

What would she say to Black people who take issue with her methods?

So again, can one of these Reign of Noose Terror (RONT) turn out to be real, please? Or else can we admit the demand for white supremacy far exceeds the supply?