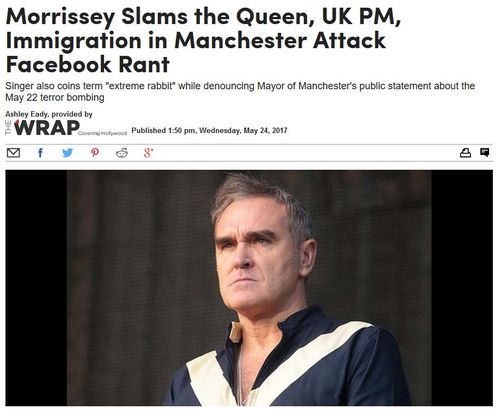 Singer Morrissey, former frontman of The Smiths, spoke out after the terrorist bombing in his native Manchester:

“In modern Britain everyone seems petrified to officially say what we all say in private,” the singer wrote on his Facebook page. “Politicians tell us they are unafraid, but they are never the victims. How easy to be unafraid when one is protected from the line of fire. The people have no such protections.

There is no one right way to react to terror. There is a wrong way.

By Anne Applebaum Columnist May 24

There is no correct reaction to terrorism. …

The Manchester bombing was an act of extreme evil, and so it has inspired a number of British writers, politicians and celebrities to call for an extreme response. …

Even before the biography of the killer was known or his links to outside groups confirmed, a singer [i.e., Morrissey] attacked the officials who were supposedly too politically correct to call him an Islamic extremist: “In modern Britain everyone seems petrified to officially say what we all say in private. Politicians tell us they are unafraid, but they are never the victims. How easy to be unafraid when one is protected from the line of fire. The people have no such protections.”

Morrissey even dared allude to “policies on immigration.”

Each one of those statements is both emotionally charged and practically pointless.

Far from solving any problems, the purveyors of dramatic solutions or divisive slogans (“the people have no such protections”) don’t help the victims, don’t help their families, don’t help their communities. They don’t prevent future attacks either. They do increase hysteria, amplify anger and exacerbate social division. …

In truth, the drama queens serve no one but themselves.

Are you allowed to call Morrissey a queen? I guess you are if he suggests he’s skeptical about Muslim immigration …

Maybe they feel brave, offering radical solutions that others “don’t dare” to suggest.

Ironically, the Washington Post columnist is a dual U.S.-Polish citizen because her husband is former Polish foreign minister Radek Sikorski. Poland has done a fine job of protect its citizens from Muslim terrorism, via not having Muslim immigrants. Here’s a map (I don’t know the original source, so take it for what it’s worth) that claims to map all the terrorism attacks in Europe. Poland is an island of safety due to its extremely homogeneous population. 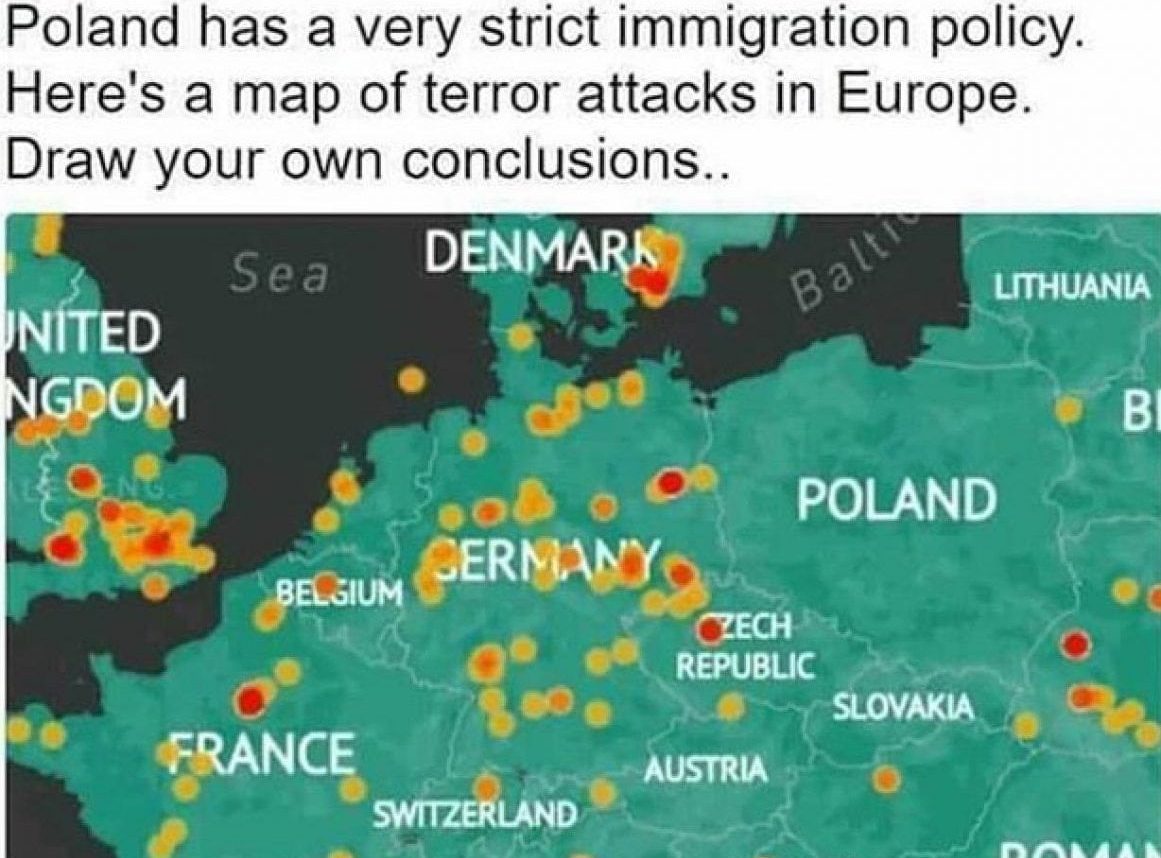