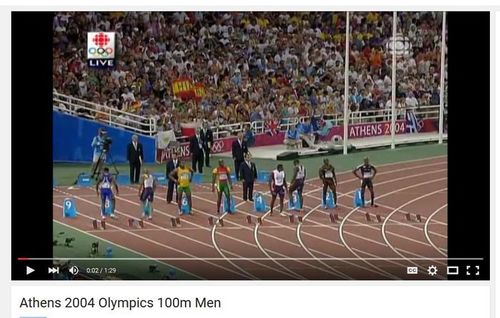 Annals of Noticing: Videos of the Last 8 Olympic 100 Meter Dash Finals Show 64 Out of 64 Finalists Were Black

The most striking statistic in human biodiversity studies was, to the best of my knowledge, first pointed out by Runner’s World editor Amby Burfoot in an article in the spring of 1992. He noted that in both the 1984 and 1988 Olympics, all eight finalists each time in the men’s 100 meter sprints were black. When you considered that people of substantial sub-Saharan descent only make up a modest fraction of the world’s population, then 16 out of 16 was extraordinary.

Typically, over 64 sprinters enter the Olympic 100m dash, from a huge range of countries around the world. To make it to the finals, you have to survive the octofinals, quarterfinals, and semifinals. So just making the Olympic finals is a major career accomplishment.

Astonishingly, however, the same thing has happened six more Olympics in a row since Burfoot’s observation, for a running total of 64 blacks out of the last 64 finalists.

You can see this stat for yourself in motion: for the record, here are videos of the last eight Olympics’ mens’ 100 meter finals.

This statistic is so unbelievably extreme that it must have multiple causes. Innate racial genetic differences in sprinting speed along don’t seem adequate.

This amazing racial disparity wasn’t always so clear. For example, here is video of the 1960 Olympics final (there were only six finalists back then), in which the 3 white guys in the field swept the medals:

(By the way, the American 1960 silver medalist Dave Sime is the grandfather of Stanford running back Christian McCaffrey, who is averaging 111 yards rushing per game so far this season. Christian’s father Ed McCaffrey was a Pro Bowl receiver in the NFL.)

One interesting theory that has been put forward by a commenter (unfortunately, I have forgotten his monicker) is that perhaps men of West African descent tend to respond more strongly to performance-enhancing drugs than do men of other races?

I don’t know how to test that theory, but it doesn’t sound implausible, either. This hypothesized interaction effect of nature and nurture might help explain why sports has become so much more segregated by position than anybody in, say, 1970 expected.