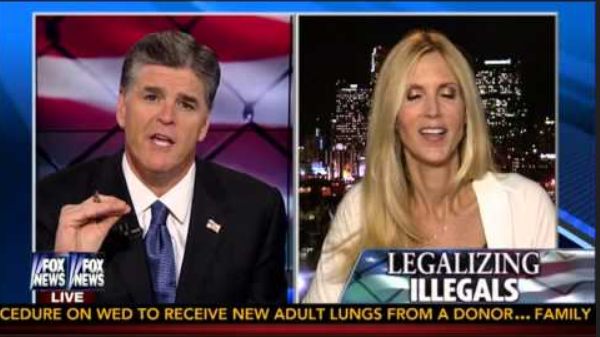 Ann Coulter To Hannity: GOP Deserves Extinction if It Pulls the Trigger on America-Destroying Amnesty

Dumb-as-a-rock amnesty huckster Sean Hannity welcomed Ann Coulter on the occasion of her new, cleverly titled column, “If the GOP is this stupid, it deserves to die”. The stupidity to which she refers is the party suicide Republicans are contemplating by the passage into law of the Gang of Eight amnesty bill, which is a thousand pages of lies and treason against the American people. 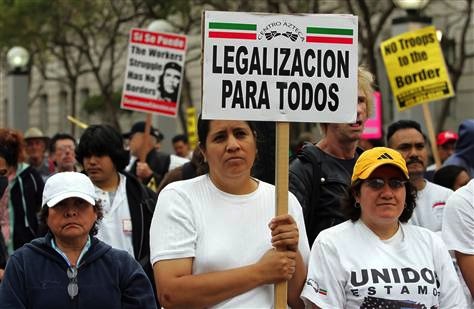 Hannity remains a defender of amnesty-pusher Marco Rubio, accepting the Senator’s BS explanation that the “temporary legal status” won’t become citizenship until the little border detail is fixed. Of course, the so-called “temporary” legal status is locked in stone and IS the amnesty because legalization confers the all-important work permit immediately, a fact which Coulter tried in vain to explain to Hannity.

As the bumper sticker says, “You can’t fix stupid!”

Democrats terrify Hispanics into thinking they’ll be lynched if they vote for Republicans, and then turn around and taunt Republicans for not winning a majority of the Hispanic vote.

This line of attack has real resonance with our stupidest Republicans. (Proposed Republican primary targets: Sens. Kelly Ayotte, Jeff Flake, Lindsey Graham and Marco Rubio.) Which explains why Republicans are devoting all their energy to slightly increasing their share of the Hispanic vote while alienating everyone else in America.

It must be fun for liberals to manipulate Republicans into focusing on hopeless causes. Why don’t Democrats waste their time trying to win the votes of gun owners?

As journalist Steve Sailer recently pointed out, the Hispanic vote terrifying Republicans isn’t that big. It actually declined in 2012. The Census Bureau finally released the real voter turnout numbers from the last election, and the Hispanic vote came in at only 8.4 percent of the electorate — not the 10 percent claimed by the pro-amnesty crowd.

The sleeping giant of the last election wasn’t Hispanics; it was elderly black women, terrified of media claims that Republicans were trying to suppress the black vote and determined to keep the first African-American president in the White House.

Contrary to everyone’s expectations, 10 percent more blacks voted in 2012 compared to 2008, even beating white voters, the usual turnout champions. Eligible black voters turned out at rate of 66.2 percent, compared to 64.1 percent of eligible white voters. Only 48 percent of all eligible Hispanic voters went to the polls.

No one saw this coming, which is probably why Gallup had Romney up by 5 points before Hurricane Sandy hit, and up by 1 point in its last pre-election poll after the hurricane.

So, naturally, the Republican Party’s entire battle plan going forward is to win slightly more votes from 8.4 percent of the electorate by giving them something they don’t want.

In the presidential election immediately after Reagan signed an amnesty bill in 1986, the Republican share of the Hispanic vote actually declined from 37 percent to 30 percent — and that was in a landslide election for the GOP. Combined, the two Bush presidents averaged 32.5 percent of the Hispanic vote — and they have Hispanics in their family Christmas cards.

John McCain, the nation’s leading amnesty proponent, won only 31 percent of the Hispanic vote, not much more than anti-amnesty Romney’s 27 percent.

Amnesty is a gift to employers, not employees.

The (pro-amnesty) Pew Research Hispanic Center has produced poll after poll showing that Hispanics don’t care about amnesty. In a poll last fall, Hispanic voters said they cared more about education, jobs and health care than immigration. They even care more about the federal budget deficit than immigration! (To put that in perspective, the next item on their list of concerns was “scratchy towels.”)

Also, note that Pew asked about “immigration,” not “amnesty.” Those Hispanics who said they cared about immigration might care about it the way I care about it — by supporting a fence and E-Verify.

Who convinced Republicans that Hispanic wages aren’t low enough and what they really need is an influx of low-wage workers competing for their jobs?

Maybe the greedy businessmen now running the Republican Party should talk with their Hispanic maids sometime. Ask Juanita if she’d like to have seven new immigrants competing with her for the opportunity to clean other people’s houses, so that her wages can be dropped from $20 an hour to $10 an hour.

A wise Latina, A.J. Delgado, recently explained on Mediaite.com why amnesty won’t win Republicans the Hispanic vote — even if they get credit for it. Her very first argument was: “Latinos will resent the added competition for jobs.”

But rich businessmen don’t care. Big Republican donors — and their campaign consultants — just want to make money. They don’t care about Hispanics, and they certainly don’t care what happens to the country. If the country is hurt, I don’t care, as long as I am doing better! This is the very definition of treason.

Hispanic voters are a small portion of the electorate. They don’t want amnesty, and they’re hopeless Democrats. So Republicans have decided the path to victory is to flood the country with lots more of them!

And it still wouldn’t be as stupid as the GOP pushing amnesty, because banning birth control wouldn’t create millions more voters who consistently vote against the Democrats.

Listening to Republican National Committee Chairman Reince Priebus burble a few weeks ago on “Fox News Sunday” about how amnesty is going to push the Republicans to new electoral heights, one is reminded of Democratic pollster Pat Caddell’s reason for refusing to become a Republican: No matter how enraged he gets at Democratic corruption, he says he can’t bear to join such a stupid party as the GOP.