Here's something she said about being called racist by Democrats: 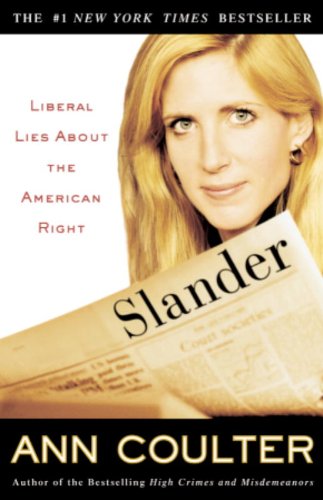 "It was after the Clinton trial, after all of the impeachment and the acquittal in the Senate, technically. And you know, even though I had been living all that time with that book, I sat back and I literally was shocked that Clinton had gotten basically the entire Democratic Party and liberals to line up behind him on the basis of his argument, "My opponents are right-wing Republicans." That—that argument worked. That was a good argument. Neither I nor anyone I know would have defended a Republican under similar circumstances, and that was when I first started thinking, "They really hate us. What is this about? Is it just abortion? Is it socialism they want?" And I started asking my liberal friends, "What are you afraid of? If Tom DeLay were czar of the universe, what are you afraid he'd do?" And I got, you know, basically, the Cliff Notes version of this book. It was just—it was just craziness. Republican Party, racist, sexist, anti-Semitic, homophobic.

And I realized you—you can't have—there is no serious dialogue or engagement of ideas between the left and the right in this country. There's a lot of fertile debate going on the right. We argue with one another all the time and come up with lots of great new interesting ideas that people are talking about, like school choice, flat tax, Welfare reform, quality of life crimes. It's amazing how productive debate can be when one isn't constantly being called a racist."

The problem is that PC has advanced to the point that you now get called racist, homophobic, and all that by Republicans. For example, Rich Lowry, John Podhoretz, and Linda Chavez. But you should still check out the book, as well as other Coulter books. As I've mentioned before, we get a commission.