And Then They Came for Director Bryan Singer 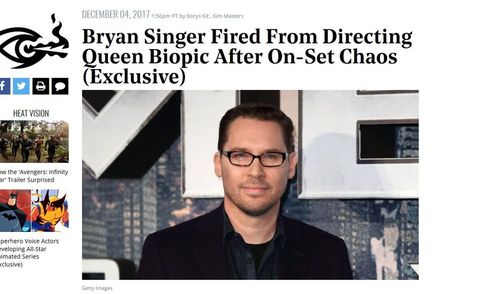 I’m shocked, shocked to hear that Bryan Singer, director of Kevin Spacey’s The Usual Suspects, the extremely metaphorical-sounding Apt Pupil, and several X-Men films, is having trouble. From the Hollywood Reporter:

Bryan Singer has been fired from the movie Bohemian Rhapsody, 20th Century Fox has told The Hollywood Reporter. …

The decision reflected an escalating clash between Singer and actor Rami Malek and was caused by the helmer being missing from the set, necessitating the Dec. 1 production shutdown of the film in which Malek stars as Freddie Mercury, frontman of the rock group Queen. The pic has been shooting in London. …

But then Singer did not return to the set after the Thanksgiving break and is believed to have been in the U.S. for about the last 10 days, according to one source. … Singer’s prolonged absence was the final straw, and so the studio decided to terminate him under his pay-or-play contract.

According to another insider, Singer has claimed he is suffering from post-traumatic stress disorder because of the tensions on the set.