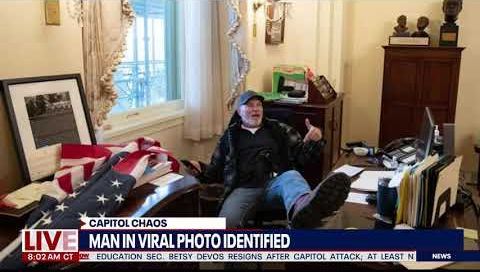 Richard Barnett, 60, of Gravette, Arkansas—my neck of the woods, I am proud to say—became a legend when, during the “siege” of the Capitol, he entered Pelosi’s office and sat at her desk with his feet up. In his own words:

“As I’m looking for the bathroom I walked by and there were doors opened to offices. I looked in and saw it was Nancy Pelosi’s office. I sat down here in my desk. I’m a taxpayer. I’m a patriot. And she ain’t appreciating the desk, so I thought I would sit down and appreciate the desk.” He realized that he had a small cut, and that he had “bled on her envelope. So, I picked up the envelope and I put it in my pocket, and I put a quarter on the desk. ‘cause I’m not a thief.”

Yesterday, speaking with a local CBS news station, who referred to him as an “extremist,” Mr. Barnett said: “If you are a wicked attorney, get in touch with me—I’m going to need one or two.”

Today, Mr. Barnett peacefully turned himself in the local Benton County Sheriffs, and was thus promptly arrested by the Feds. The FBI, led by a Special Agent from Little Rock, then proceeded to send a full motorcade of what appear to have been no less than ten black SUVs with flashing lights to Mr. Barnett’s modest country home and proceeded to “investigate,” or, in layman’s terms, tear it apart. Surely, a great national security disaster was thereby averted. As I write, “reporters” are still set up outside Mr. Barnett’s lonely gate.

Republican Congressman Steve Womack, who represents Arkansas’s third Congressional district, was featured on last night’s local news demonizing Mr. Barnett as some sort of domestic terrorist, very much in line with the Republican Party’s general disdain for the people whom it claims to represent; it remains unclear where Mr. Womack’s indignation was for the past year of mayhem and murder. Mr. Womack claims that his “heart dropped” when he found out that Mr. Barnett was one of his constituents, and that he finds Mr. Barnett and everything that he stands for to be repulsive, that he does not represent “our values.” A black man, quite rare in this area, I assure you, then appeared to dutifully state that “this isn’t who we are in Northwest Arkansas.”

To call the swift response from the Department of “Justice” hypocritical, along with the totalitarian media crackdown now occurring, would be an understatement. Words cannot capture the truth of this situation. There is no double standard in America—there is only one, and it is that white conservatives must be silenced and then “cleansed.” It is open season on white patriots who dare to resist. Let us just acknowledge that the real crime, the treason and sedition, is that which is carried on every day in the United States Capitol against the Historic American Nation—not the desperate attempts of Heritage Americans to finally try do something about their dispossession. Remember: the election was not stolen from Donald Trump. It was stolen from us.

Decry violence and “bad optics” all that you want; when politics is driven underground, chaos will take its place. What happened at the Capitol was a breath of fresh air. America still has some fight left in it.