Analyst: One in Three Jobs Will Be Done by Smart Machines by 2025

The machine age is hard upon us yet its implications for the economy of America is not discussed by anyone in government. Humans are rapidly becoming less necessary in the workplace where computers, automation and robots are performing tasks that would have been thought science fiction just a few years ago.

Last year, an Oxford University study (“The Future of Employment: How Susceptible Are Jobs to Computerisation?”) was published that concluded “about 47 percent of total US employment is at risk” to be replaced by smart machines.

Below, robots build cars at a California Tesla factory in 2012. 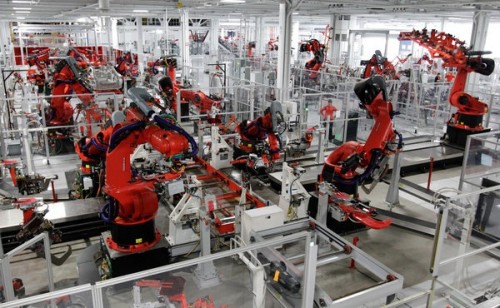 Now an expert from the Gartner consulting firm predicts that one-third of US jobs will be done by a computer or robot by 2025 — that’s 11 years from today. How is society supposed to work when a third of the working-age population cannot find jobs?

Some in the government, in particular Rep Paul Ryan, advocate hugely expanded legal immigration to replace the boomer generation’s retirement. Increased immigration would be a terrible mistake in terms of what the future workplace will need, because many tasks will be performed by machines. Millions of additional workers imported from abroad according to the wishes of elites and billionaires would mostly end up in the growing permanent underclass.

At its Symposium/ITxpo conference in Orlando, Florida, the technology research firm’s forecast pointed toward a future of not only automated physical work, but cognitive tasks as well.

We’ve long heard of automatons replacing factory jobs, but Gartner said, for example, the technological advances in software have allowed machines to perform a variety of tasks that has already infiltrated many industries, including financial analysis and medical diagnostics.

In February, PBS NewsHour’s Making Sense talked to authors Erik Brynjolfsson and Andrew McAfee of “The Second Machine Age” about what was different with this new wave of technological advancement:

“We are at an inflection point. The first big inflection point in human history was about 200 years ago, when the steam engine started the industrial revolution,” Brynjolfsson said. “That was a period that saw a whole set of new machines come along that could automate muscle power, physical work.”

“In recent years, we are seeing a wave of technologies that can augment, automate all sorts of cognitive tasks,” he added, “and we think, ultimately, those will have as big, or an even bigger effect on humanity as the first industrial revolution.”

Sondergaard said drones are an example of an emerging smart machine that’s competing with the human worker’s cognitive abilities, reported Computer World. Drones’ uses have now extended into agriculture, geographical surveys and oil and gas pipeline inspections and their contributions may become standard in five years.

“One day, a drone may be your eyes and ears,” he said.