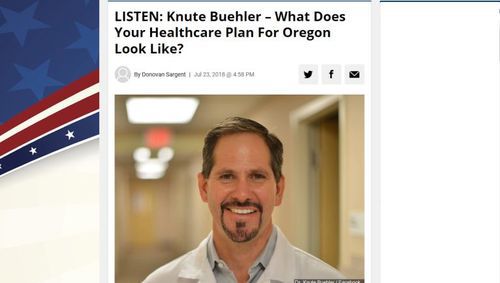 An Immigration-Woke Republican Gubernatorial Candidate In Oregon? Pinch Me!

In 1994, California voters decisively approved Proposition 187 to deny state-funded benefits (including K-12 schooling) to illegal aliens. And the winning proposition had political coattails, rescuing the re-election campaign of Governor Pete Wilson, a Republican. As Wikipedia tells it:

[Wilson] was a prominent supporter of Proposition 187, which ultimately became a key issue during his 1994 re-election campaign against Democratic opponent Kathleen Brown [nb: Jerry Brown's sister -- PN]. After facing record low approval ratings during his first term, Wilson trailed Brown in opinion polls by more than 20% early during the gubernatorial campaign. Commentators considered his aggressive support of the Proposition 187 as crucial to his re-election.

That's also how political reporter and dean of the California press corps Dan Walters recalled it in 2015:

Then-Gov. Pete Wilson, facing a rough re-election battle in 1994, rode both Proposition 187 and the death penalty to a landslide re-election over Brown’s sister, Kathleen.

So Wilson had demonstrated something fundamental: Using immigration-policy-in-the-broad-national-interest as a campaign theme is a winner. But it's a lesson Republicans have nearly all refused to learn, until Donald Trump came along. (And it's clear from the behavior of well-placed, feckless Republicans in the House of Representatives that such refusal is ongoing and adamant, despite November 8, 2016's startling reminder.)

Instead, the "lesson" they actually did "learn" is that Proposition 187 doomed Republican candidates for statewide office in California ever since (Arnold Schwarzenegger excepted), but as Steve Sailer reminded us at VDARE.com approximately two years ago [Peter Beinart In The ATLANTIC Still Pounding The Myth Of Prop 187], the reality is different.

What about other states? Here in Montana in its 2011 session, our Republican-dominated legislature placed Legislative Referendum 121, denying some state benefits to illegal aliens, on our November 2012 ballot. The legislators who led the effort were inspired by polling late in 2010 that showed combatting illegal immigration was a hugely-winning issue for Republicans. Indeed, LR-121 captured nearly 80 percent of the vote that November and was easily the winningest item—whether ballot measure or candidate—on the ballot.

But despite those Republican legislators' motive, none of the Republicans running for office statewide here in 2012 paid any attention to LR-121. And notably, their candidates for governor and U.S. senator both lost narrowly. I wrote about this in Astonishing Immigration Patriot Victory In Montana—No Thanks To GOP, Which Ran Away (And Lost).

Similarly, in 2014, Monica Wehby was challenging Democratic incumbent Jeff Merkeley for one of Oregon's seats in the U.S. Senate. That same year, Oregonians for Immigration Reform [OFIR] had, through herculean labors, qualified for the November election a citizens'-veto referendum (Measure 88) on driver's cards for illegal aliens. As OFIR president Cynthia Kendoll told me, "Wehby met with us several times and seemed interested, but she never came out in support of Measure 88. I think she was influenced by her handlers, who were apparently telling her that 88 was 'too divisive'."

"Too divisive." Right: Measure 88 went on to overwhelming triumph with 66 percent of the vote while Wehby was losing to Merkeley by 19 percentage points, even though some polls that spring had showed her to be within striking range (or even ahead) of the incumbent.

Ah, those electorally-crucial Republican handlers! Get their advice, then do the exact opposite ...

Thus it's a matter of some note that Knute Buehler, the Republican who's challenging incumbent Democrat Kate Brown in Oregon's gubernatorial race this fall is quite publicly on the record that he'll be voting in November to repeal the state's longstanding illegal-alien sanctuary law. (He'll have a chance to do this because of OFIR's recent success—after another year of strenuous work—in qualifying the repeal measure for the ballot.)

Buehler's statement of his intent came in a July 23rd broadcast conversation with Portland-based talk-radio host Lars Larson. You can hear the pertinent exchange in an audio clip titled Knute Buehler – What Does Your Healthcare Plan For Oregon Look Like?.

Buehler is a physician as well as a current state representative, so it was natural for Larson to bring up healthcare policy with him, but then Larson neatly segued into illegal immigration, as follows:

Lars Larson -- You talk about getting the opiod addiction rate down—heroin—but the biggest problem there, the street drugs that come in, almost a hundred percent of the heroin in this state and in most of the rest of the country, according to the DEA, is coming from Mexico. Folks have asked me, Doctor, "So where is Knute Buehler's position when it comes to illegal aliens and the fact that they're used to traffic in an awful lot of the worst drugs that are brought here: heroin, methamphetamine, and cocaine."

Knute Buehler -- Yeah, absolutely, Lars. I'm not for open borders, I think we have borders for a reason, one is for safety, especially for public safety and control the flow of people and goods across the nation. And that's what we have really, unfortunately, allowed, way too much of. And importantly, as we saw in this last legislative session, Lars, that the Democratic leadership pushed across a bill that decriminalizes possession of some of these most powerful drugs, like heroin and meth, and that's a step in the wrong direction. People are caught with these powerful drugs, they need to be prosecuted.

LL -- Alright, so there's a ballot measure coming up this fall—it made the ballot—to say let's get rid of Oregon's sanctuary-state status, that says—or police have used it as an excuse not to inquire into someone's legal status in America, even if they are accused of a crime. And police agencies then say, "We're not going to cooperate with ICE or INS ["INS." Wow, that dates Lars! -- PN] or any of the other federal agencies. How are you gonna vote on the sanctuary bill, on the sanctuary ballot measure?"

KB -- Yeah, well I already voted on it in the sanctuary city, sanctuary state law that came before the legislature in 2017. And I'll be voting against it this fall.

LL -- Against the law but for the ballot measure, right?

(Buehler added that people reporting crimes shouldn't be put at hazard and that racial profiling must be avoided.)

So he's stated unequivocally that he favors repealing the sanctuary-state law. But will he use the issue to help power his campaign? So far, there's no indication that he will (and he didn't speak up in favor of the measure when OFIR were in their frantic, signature-collecting phase).

Perhaps someone who reads this can get through to Buehler and call his attention to the 1994 Pete Wilson example and those 2012 and 2014 Montana and Oregon anti-examples.

Meanwhile, OFIR kick off their fall campaign to convince their fellow Oregon citizens that the time for being a sanctuary state is waaaaaay over with a public meeting this Saturday, August 4, at the Best Western Mill Creek Inn in the state capital of Salem, starting at 2 p.m..