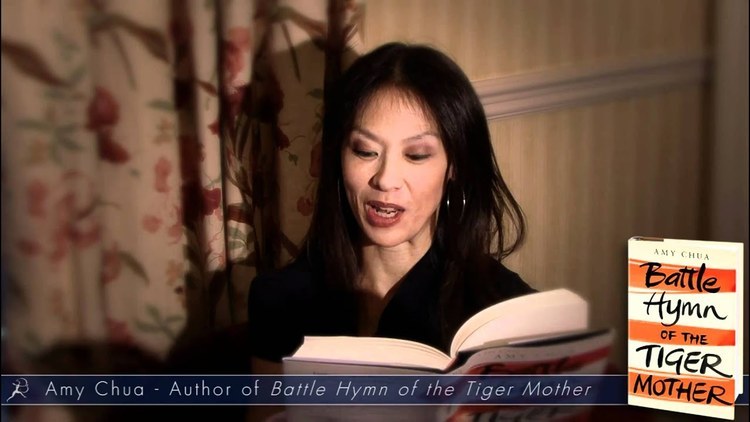 But reading the book, "Battle Hymn of the Tiger Mother," it can be hard to tell when she is kidding.

"In retrospect, these coaching suggestions seem a bit extreme," she writes in the book after describing how she once threatened to burn her daughter's stuffed animals if she did not play a piano composition perfectly. "On the other hand, they were highly effective."

In interviews, she comes off as unresolved. "I think I pulled back at the right time," she said. "I do not think there was anything abusive in my house." Yet, she added, "I stand by a lot of my critiques of Western parenting. I think there's a lot of questions about how you instill true self-esteem."

Her real crime, she said, may have been telling the truth. "I sort of feel like people are not that honest about their own parenting," she said. "Take any teenage household, tell me there is not yelling and conflict."

One thing you can say for Ms. Chua is that she's got guts. When I read her book World on Fire in early 2003 to review it, I learned something about current history that I had been totally uninformed about before. I was startled by Chua's passage below (which was reprinted in the Times of London late in 2003). Even as an avid consumer of the news, I had never heard these facts before I read Chua's book on market dominant minorities:

IN THE spring of 2000, a professor whom I'll call Jerry White was furiously trying to finish an article on the debacle of Russian privatisation. Jerry and his co-authors had served as legal advisers to the Russian Government during the country's mass privatisation process in the late 1990s. The article described how Russia's pro-market reforms had gone horribly awry. Instead of dispersing ownership and creating functioning markets, these reforms had allowed a small group of industrialists and bankers to plunder Russia, turning themselves almost overnight into the billionaire owners of Russia's crown jewels while the country spiralled into chaos and lawlessness.

It seemed to me that most of the key players in the privatisation of Russia were Jewish.

"You can't tell anything from names," Jerry snapped, clearly not wanting to discuss the topic any further.

As it turns out, six out of seven of Russia's wealthiest and, at least until recently, most powerful oligarchs are Jewish. The six Jewish businessmen most frequently called oligarchs are: Roman Abramovich; Pyotr Aven; Boris Berezovsky; Mikhail Fridman; Vladimir Gusinsky; and Mikhail Khodorkovsky [I recently read Khodorkovsky is half-Jewish]. The seventh oligarch, the only "full-blooded ethnic Russian", is Vladimir Potanin.

The height of their influence was reached in 1996 when the Yeltsin Government hung on the verge of political and financial collapse. Already wealthy, the oligarchs collectively put forth the so-called "loans-for-shares" deal - now notorious, but at the time grudgingly endorsed by Western advisers and Russian economists.

Essentially, the oligarchs offered loans and political support to the Government in exchange for majority shares, at a fraction of their potential market value, in the behemoths of the Russian economy, a half-dozen massive enterprises breathtakingly rich in nickel, gold and oil deposits.

Despite the inevitable rumours, these men did not become billionaires through violence or mafiya tactics. Rather, they became billionaires by playing the game more effectively and ruthlessly than anybody else during Russia's free-for-all transition to capitalism.

Russia's incipient corporate economy operated in practically a legal vacuum at the time, with no laws prohibiting insider trading or other forms of self-dealing. "Russia has been looted all right," says Chrystia Freeland, in Sale of the Century, "but the biggest crimes haven't been clandestine or violent or even, in the strict legal sense, crimes at all. Russia was robbed in broad daylight, by businessmen who broke no laws, assisted by the West 's best friends in the Kremlin."

Chua, herself, is descended from the market-dominant Chinese minority that controls the economy of the Philippines.