Senator Marco Rubio (R-FL), a top quisling in the Gang of Eight amnesty scheme, thinks appealing to his tribe the Cubans will be a plus for obtaining the American Presidency in 2016. It’s an odd strategy, but one which will likely find favor with the media elites.

Hey, Rubio, most Americans don’t care squat about Florida Cubans, some of whom were criminals deported by Castro in 1980 to stupid-generous America. But Rubio seems to want to play the hispanic card rather than expertise or accomplishment. Maybe he is really pitching to be the Vice President on a Republican ticket that would then include the all-important Diversity! Anyway, Rubio is young at 43 and may be strategizing for a more serious run at a later date.

Below, Senator Rubio loomed large in the Gang of Eight Senate cabal to shove their deeply flawed amnesty down America’s throat during the last session of Congress.

Rubio’s perfidy even inspired a song, The Amnesty Man:

The Miami Herald reported that Rubio is planning his announcement at Miami’s Freedom Tower (shown below in a romanticized style) which is a big deal to Cubans, but means Zero to US citizens. 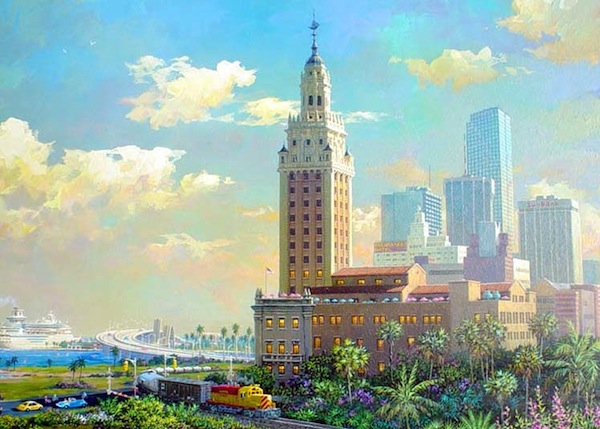 As noted by the Herald, the tower houses the Cuban American Museum, so the place is meaningful to foreigners from Castro’s communist paradise.

Fox News’ Neil Cavuto made a similar characterization about the building, calling it “a powerful symbol for thousands of Cuban refugees.”

Marco Rubio has reserved the Freedom Tower in downtown Miami for an undisclosed event April 13, which appears to be a potential, if not likely, spot for Florida’s junior senator to announce his candidacy for president.

A Rubio adviser stressed nothing has been nailed down for any kind of announcement, but the timing makes sense: Likely presidential candidate Rand Paul is expected to make things official April 7, followed by a five-day, five-state announcement tour, so Rubio presumably would not want to share the spotlight during that period.

All-but-announced candidate Jeb Bush appears to be in no rush to shift more formally into campaign mode, but Texas Sen. Ted Cruz made his announcement this week, and Democrat Hillary Clinton is expected to make her campaign announcement in April as well, though nothing has been set.

Rubio, 43, has been preparing for a potential presidential run for at least a year. While behind in most early polls, he has generated considerable buzz as a top-tier contender who offers the party a fresh face, foreign policy experience, charisma and substance.

The Freedom Tower is apparently one of several venues under consideration by Rubio, but it could be an ideal postcard setting to kick off a presidential campaign promoting the promise and greatness of America by the son of Cuban immigrants.

The building is reserved for 5:30 p.m. that Monday, which also happens to be Thomas Jefferson’s birthday.

Completed in 1925, the Mediterranean-style building on Biscayne Boulevard once housed the now-defunct Miami News before it moved in 1957.

After Fidel Castro seized power in 1959, the U.S. government used the tower to process and assist refugees fleeing the Communist dictatorship.

The iconic building changed hands a number of times. It was finally acquired by the college in 2005 when developer Pedro Martin donated it to the school.

The tower is home to the Cuban American Museum and it houses the MDC Museum of Art and Design.

In January, the building officially became the headquarters for a “Media Hub of the Americas” under an agreement between the U.S. Department of State and Miami Dade College. The State Department will use the office for hosting foreign dignitaries and engaging Spanish-language and Portuguese media.