Amnesty: It's the Work Permit, Stupid

It’s disappointing to see smart people like Pat Buchanan misstate the point of the current amnesty dust-up by talking about a “path to citizenship,” a phrase he used twice in the brief clip below, as if that were the goal of unlawful foreigners.

Millions of illegals don’t endanger their lives crossing the hazardous Arizona desert so they can become American citizens and participate in our wonderful elections. They come for the immediate gratification of more money in the very near future.

Of course, the Democrat party and the raza bunch want the foreigners as voters ASAP in order to expand the political power of leftists and ethnic tribalists.

But the illegals themselves are here for the money, period. And any free stuff they can mooch from Uncle Sucker.

The promise of Marco Rubio and the Gang of Eight that illegals would get probationary legal status with an accompanying work permit on day one has been played expertly by raza propagandists, with help from naive triangulators like Senator Rubio.

The little migrants will have to wait years to get a real green card and be on the “path to citizenship” but meanwhile they can remain here and work legally. That’s hardly going to the real back of the line, like in Manila or Mexico City, where would-be legal immigrants continue to wait long years for entry.

Below, the Senate Gang of Eight has some familiar faces from 2007, along with similar provisions. 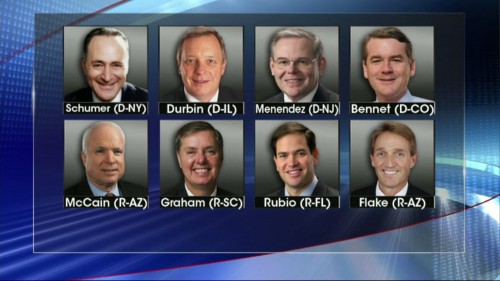 But the public yammering is mostly about the “path to citizenship” not the immediate bonanza of the employment keys to the kingdom. (Although Ann Coulter commented that Rubio’s plan is a “wolf in wolf’s clothing” and assessed the ability to live and work legally in the US as “the Hope Diamond of the universe.”)

In addition, much discussion has also been conveniently funneled toward the border security tar baby, definitely a stubborn pustule in the national flesh, however workplace security is far more central to the employment magnet. No jobs, no mobs of illegal aliens here to steal them. We need to focus more on the central issues and not the extraneous.

For starters, repeat this phrase until it takes hold:

The work permit is the amnesty.