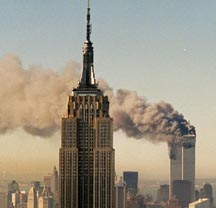 From the Rasmussen pollsters: Obama's decision to bestow American civil rights on the worst terrorists in court is not appreciated by a majority of citizens.

Furthermore, the imperiousness of this administration to jam through its extreme agenda despite the danger to the public is becoming very concerning. Surely al Qaeda will be inspired to mount an even more destructive attack on New York City during the trial.

"Fifty-one percent (51%) of U.S. voters oppose the Obama administration’s decision to try the confessed chief planner of the 9/11 attacks and other suspected terrorists in a civilian court in New York City.

A new Rasmussen Reports national telephone survey finds that just 29% of voters favor the president’s decision not to try the suspects by military tribunal at the Guantanamo Naval Base in Cuba where they are now imprisoned. Nineteen percent (19%) are not sure whether it was the right decision or not.

Only 30% of Americans said suspected terrorists should have access to U.S. courts, while 54% favored military tribunals in July 2008, as the first such tribunal got under way at Guantanamo.

"In the string of amazing decisions made during the first year of the Obama administration, nothing seems more like sheer insanity than the decision to try foreign terrorists, who have committed acts of war against the United States, in federal court, as if they were American citizens accused of crimes.

But over and above the utter inconsistency of what is being done is the utter recklessness it represents. The last time an attack on the World Trade Center was treated as a matter of domestic criminal justice was after a bomb was exploded there in 1993. Under the rules of American criminal law, the prosecution had to turn over all sorts of information to the defense– information that told the Al Qaeda international terrorist network what we knew about them and how we knew it."