American Joblessness in Fresno Is Noted 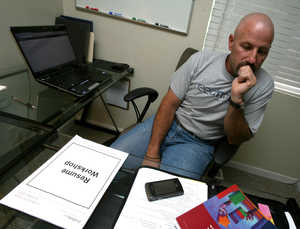 It’s a nice change to see sympathetic coverage of an American suffering in this rotten economy, instead of more boilerplate about the plight of poor illegal alien Juan who came for a better life (sniff).

The subject of the article, David Martin (pictured), has valuable accounting skills but lives in Fresno County, where the official unemployment rate is 16 percent. He lives hand to mouth, barely making ends meet, after losing his job more than a year ago.

(See the Sacramento Bee’s interactive map of California unemployment by county over time.)

Meanwhile, Washington continues to admit over a million legal immigrant workers annually, a number which is larger than new jobs created. How is that policy supposed to work for Americans? Obviously, it isn’t expected to work.

Pundit Charles Krauthammer’s remarks on July 4 would not have been reassuring to Martin, age 47:

“In 2007 the average time to get a new job was five weeks. It’s now near six months. And that implies a whole segment of the population, the more elderly or the middle-aged who may never get employed again.”

The Fresno Bee didn’t mention the immigration angle as it concentrated on the psychological aspect of long-term unemployment, but at least it noticed an American worker. The Census observes that 41.9 percent of Fresno residents speak a language other than English at home.

If David Martin has 50 cents left over at the end of the month, it’s a very good month.

That’s a difficult situation to accept for someone who used to make $50,000 a year in the accounting field. But he has been out of work since March 2010, and times are hard.

“You go through days of depression - and I mean really deep depression - where you can’t even see tomorrow. And it’s like, man, this is a hopeless situation,” said Martin, 47. “[You think] that you’re useless. I mean, my God, if I was useful, people would be hiring me, right?”

Martin’s situation is not so unusual these days. The anxieties have risen for the 46.8% of unemployed Californians - just over 1 million people - who have been out of work for longer than 27 weeks, which is the threshold for long-term unemployment, according to the state Employment Development Department.

The unemployment rate in Fresno County is 16%. The EDD doesn’t track long-term unemployment by county, but in the past year, about 900 people who had been unemployed longer than six months signed up for help at Fresno County Workforce Connection, an organization that runs job resource centers for the unemployed. That’s nearly half of everyone who signed up, and it doesn’t count people who passed the six-month mark while working with the group.

Martin keeps busy applying for jobs and working at the Sanger ranch house where he lives. A friend owns it, and he helps to maintain it in order to get a reduction on his rent. But even so, every day becomes harder to get through, he said.

“The longer you’re unemployed, the more you start doubting yourself,” Martin said. “Every night, I pray that God gives me the strength and wisdom to get through this.”

Finding the motivation to keep applying for jobs, day after day, can prove challenging. Many people who have been unemployed reference “the darkness” - a state in which someone gives in to hopelessness.

David Blustein, a professor in counseling psychology at Boston College who works with unemployed clients, said unemployment is a major stressor that can contribute to depression, anxiety, substance abuse and marital problems.

“The mental health consequences of unemployment are very serious, particularly for people who are unemployed for six months or more,” Blustein said. “Work is essential to psychological health.”

Blustein said having a job gives people a sense of connection to the rest of society, and therefore unemployment affects everyone in the community.

“Work is a central organizing aspect of life,” he said. “As work disappears in the community, the community begins to become chaotic.”

The way for the jobless to stay connected, he said, is to have support from family and friends, and to use time productively. It’s good to stay positive and get help in the job search, he said.

This kind of advice resonates with Eva Hinojos, who has found every opportunity to stay productive in the year and a half she has been without a job. She says she was laid off from a hospital.

Hinojos, 52, volunteers with Central Valley Professionals - an organization of jobless professionals who volunteer to help each other find jobs. In a year there, she has developed 14 workshops to help members improve their job-seeking skills and hopes to start a non-profit organization that offers this sort of education to anyone.

“I can actually help people get through the process of unemployment because I relate to them,” said Hinojos, who has experience as a human resources professional.