Senator Sessions continues to recommend Congress use its power of the purse to knock back Obama’s executive amnesty to give work permits to millions of illegal aliens. 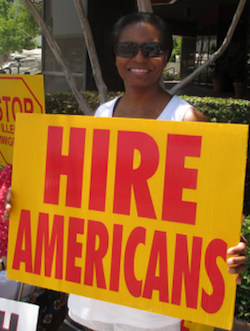 Powerful forces from Silicon Valley to big agriculture have spent millions of dollars to increase the number of cheap foreign workers to replace citizens. Senator Sessions has fought these wealthy “Masters of the Universe” for years to protect American jobs from foreign encroachment.

Now Sessions is doing all he can to get weak-kneed Republicans to stand strong against the lawless administration.

WASHINGTON—U.S. Senator Jeff Sessions (R-AL), Ranking Member of the Senate Budget Committee and a senior member of the Senate Judiciary Committee, issued the following comments today in response to the current plan being floated in the House of Representatives regarding the President’s unconstitutional amnesty:

“The Chairman of the Republican Party made a promise to America on executive amnesty: ‘We can’t allow it to happen and we won’t let it happen… everything we can do to stop it we will.’

Unfortunately, the plan now being circulated in the House fails to meet that test. The executive amnesty language is substantially weaker than the language the House adopted this summer, and does not reject the central tenets of the President’s plan: work permits, Social Security, and Medicare to 5 million illegal immigrants—reducing wages, jobs, and benefits for Americans.

Congress considered and rejected these changes to immigration law in 2006, 2007, 2010, 2013, and 2014. The President’s action erases the laws Congress has passed in order to implement laws Congress has refused to pass.

Now the President demands Congress fund his imperial decree and declare its own irrelevance.

That is why Congress must respond to the President’s unlawful action by funding the government but not funding illegal amnesty. This is a perfectly sound and routine application of congressional authority. In fact, the nonpartisan Congressional Research Service reports that last year’s omnibus spending bill included 16 such funding restrictions on fee-based programs.

Such a plan would put the focus where it belongs: on Senate Democrats. They are the ones who should be made to choose sides—save Obama’s amnesty or save Americans’ jobs and borders.

Polling shows voters believe that Americans should get preference for available jobs by almost a 10-1 margin. Republicans should not be timid or apologetic, but mount a bold defense of struggling Americans.

Billions of dollars and countless hours have been spent advocating immigration policies that help everyone but the actual citizens of this country. Who will be their voice, if not us?”

Since taking office, President Obama has engaged in a sustained and calculated campaign to dismantle the immigration laws of the United States. As his own former ICE Director, John Sandweg, explained: “if you’re a run-of-the-mill immigrant living here illegally, your odds of getting deported are close to zero.” ICE officers report that their agency caters to special interests and open borders activists, while they are ordered to ignore their oaths and the laws of the United States.

Additionally, since the year 2000, the U.S. has issued nearly 30 million lawful visas for permanent immigrants or temporary guest workers. As reported by the Pew Research Center, the total number of immigrants in the U.S. has reached a record 41.3 million. The share of the U.S. population that was born in another country, per the Census Bureau, has quadrupled.